Saturday marked my fourth live indy wrestling show of the month, but the first that I just got to sit back and be a fan. My buddy Tom Harness and I headed to Cape Comic Con Saturday afternoon and then made our way to Cape Championship Wrestling. You can hear our thoughts on the show on Monday's My 1-2-3 Cents podcast (Episode 179). 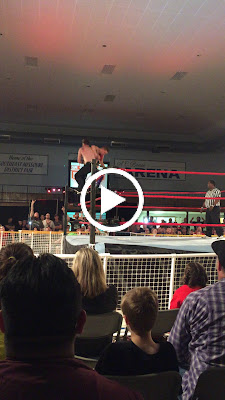 Of course, there were plenty of great highlights from Supershow II, including Ace Hawkins and Jackson Crowley's match. The year-long feud ended in a blood and a high spot to top all high spots. Manager Jeff O'Dell lost his hair. Sarah Summers captured the CCW Women's Championship. Marco Stunt and Mikey won the CCW Tag Team Championships. And Austin Lane retained the CCW Heavyweight Title against ECW Legend Tommy Dreamer. Be sure to check out Pro Wrestling Unscripted this week and the crew there will highlight each match.

For me though, the best moment of the night was the announcement of a new general manager for CCW. Because of a prematch stipulation, Osby Tomlin is out as GM, which opened the door for a new authority figure. The powers that be at CCW picked a great man in my friend Lane Austin. The crowd popped at the news as Lane made his way to the ring. He promised changes are coming, I look forward to seeing what he has in store for the roster.

Regular readers here know Lane has had some ups and downs in recent weeks. Last month he was hospitalized with complications from his type 2 diabetes. The physicality of being a referee for both CCW and Stride Pro Wrestling has taken him out of the wrestling game until now. In my 1-2-3 cents, Lane will fulfill his duties as GM very well and I'm proud to see he's going to be able to continue to be a part of something he loves so dearly.

Posted by Kevin Hunsperger at 3:58 PM