Signing on the dotted line

One of the biggest rivalries going on right now in Stride Pro Wrestling is former friends and classmates Jay Spade and Tony Flood. The bad blood came to a boiling point after Flood won the Stride Rumble in February and earned the right at a championship match against Spade.

It was the first opportunity Flood had at the Stride Pro Wrestling Championship since night one when he competed in a fatal four-way against Ax Allwardt, Heath Hatton and Frank Wyatt for the belt. Spade retained in their first match. But Flood used a lead pipe to take out Spade and win the belt. His victory was shortlived and Spade became Stride's first two-time heavyweight champion on April 14. 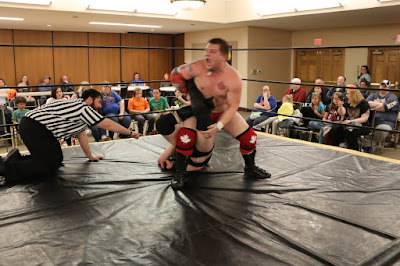 The bitterness between the two isn't over by a long shot. They are slated to end this feud inside a steel cage on Saturday, May 26 in Pinckneyville. But before we get there, the two must sign the contract. I know exactly what you're thinking because I'm thinking the same thing too. What's going to happen May 5 at the contract signing? Has there ever been a public contract signing go down in wrestling where something hasn't happened? 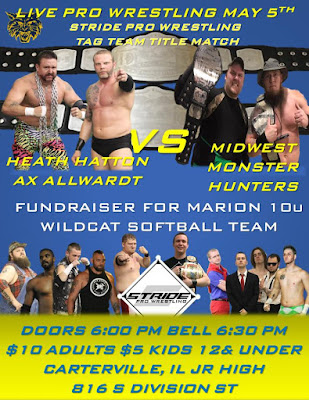 If you want to know you're going to have to join us this Saturday night. We'll be at Carterville Junior High School on Division Street in Carterville, Illinois. Bell time is 6:30 p.m. and plenty of action will be happening that night. See you then.
Posted by Kevin Hunsperger at 2:33 PM