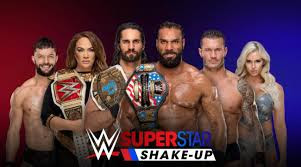 The 2018 WWE Superstar Shakeup is in the books. I'm not going to analyze each move (which you can see here), but I will comment on a few things that stand out to me. Many online say it looks like SmackDown Live got the upper hand in the changes. I tend to agree with that, but believe the moves could jumpstart the careers of several Superstars on their respective shows.


I like that most tag teams and other factions are staying together. However, the split of Shelton Benjamin and Chad Gable disappoints me. The duo was one of my favorites on the SmackDown Live roster. This, of course, could lead to a reuniting with Jason Jordan who is out with an injury. Let's face it, the tag team scene needs help, even with the Shakeup

I know Maria Kanellis just had a baby. I have no idea what the future holds for her. I do hope she returns to Raw with her husband Mike. Without her, the concept of Mike Kanellis doesn't make a whole lot of sense.


Miz moving to SmackDown Live will be good as he and Daniel Bryan have natural chemistry. I would still like to see Miz with some sort of backup. The Miztourage is staying on Raw, which concerns me about the futures of Curtis Axel and Bo Dallas. I hope Maryse is able to rejoin her man on the blue brand down the road too.

NXT call-ups are great. Several new talents from that roster will be appearing on both Raw and SmackDown Live. But the reality is, sometimes these new faces and names get lost in the shuffle. Let's face it, what works in NXT doesn't always translate well on the main roster (see Bo Dallas). Or other talents will end up becoming future endeavored soon.


The biggest surprise to me was Charlotte Flair not going to Raw. I assumed with losing the SmackDown Live women's championship she'd move on. I'm curious to see how Carmella's title run is booked from here.

Overall though I'm excited about the changes and fresh feuds. I'm also looking forward to the Greatest Royal Rumble later this month and upcoming BlackLash show which goes back to the dual-branded format.

Posted by Kevin Hunsperger at 2:00 AM