Tommy's dreaming of a championship win 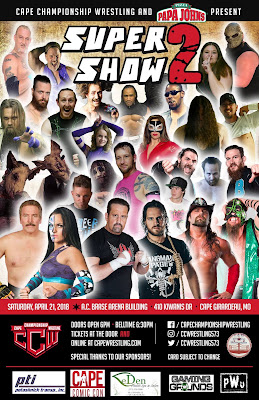 I love Super Show. It's the indy company's WrestleMania weekend and part of the annual Cape Comic Con. There will be CCW wrestlers and other guests on hand at Cape Con all weekend too. Tommy Dreamer will be on hand Saturday prior to his championship opportunity.

The match poses an interesting scenario for CCW. If Dreamer wins the belt, he would likely take it out of the area and defend it in other areas, including his House of Hardcore show. That would give CCW nationwide exposure. It would also ensure future appearances by Dreamer who would have to come back to Cape and defend against the wrestlers on the current roster. But will the recent attitude change from 'The Best of the Best' Austin Lane translate to a victory in this high profile title defense? Personally, I wouldn't bet against him.

CCW has also been working with Ring of Honor on some projects, including training sessions with the company's lead booker, Delirious. He's from the region originally and is coming back to help train men and women who want to pursue a career in the ring. 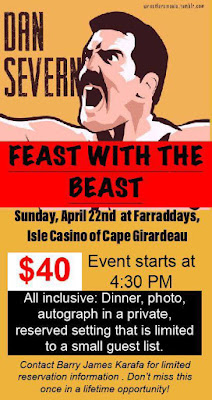 MMA star turned pro wrestler Dan "The Beast" Severn will be on hand too. He is part of a special six-man tag team match and hopefully gives Roger Matheus a taste of his own medicine, but I digress. Severn will be sticking around and doing a dinner event called 'Feast with the Beast' at the Isle of Capri Casino Sunday night.

This is just a sample of what you'll see this weekend with Cape Con and CCW. Click here for all the action.

Posted by Kevin Hunsperger at 7:03 AM