I know Rocky Johnson and Tony Atlas were not inducted into the WWE Hall of Fame together, but when I first started watching wrestling the duo was the tag team champions. I believe they were the black first tag team to hold the WWF titles, having beaten the Wild Samoans in late 1983.


Johnson and Atlas, better known as The Soul Patrol, would come out and defend the titles and do some fancy footwork in the process. They worked well as a team and the fans seemed to love what they were doing. As their momentum was building, it seemed as if the rug was suddenly yanked from under them.

It was April 1984 and an unlikely tag team (at least in my 11 year old mind) of Adrian Adonis and Dick Murdoch upset the Soul Patrol for the belts. Johnson and Atlas had such great physiques it baffled me that two guys could lose to a pair in the shape of the heels. Remember, I was 11 and new to wrestling. In the closing moments chaos ensued and Adonis rolled up Johnson for the pin. I thought as this was happening, he's so powerful, why can't he push that guy off of him. Again, I wasn't in on the act yet and sulked after the champs were dethroned.


Both Johnson and Atlas stayed with the company as singles wrestlers for a bit after the loss. I lost track of Rocky, but Atlas would go to World Class and compete as "The Black Superman." Yes that sounds ridiculous, but when you consider his return to the WWF in 1991 as Saba Simba, you'd long for his days in WCCW. That stint was brief and Atlas fell on hard times. 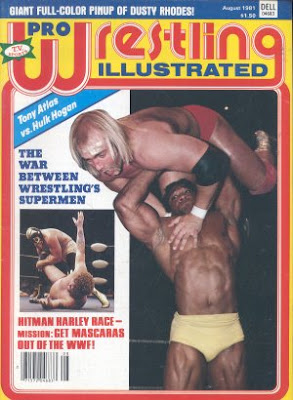 Years later WWE would not only induct Atlas in the Hall of Fame (2006), but bring him back as a manager for Mark Henry. The duo seemed to work well together, but it wasn't a long term plan. The Hall of Famer was released, but was a part of Legends House on the WWE Network. And long before any of that Atlas was press slamming Hulk Hogan (a heel) over his head and making magazine covers for doing it. He was a beast.

Johnson was inducted in 2008 by his son The Rock. Prior to that he had made a few appearances on WWF programming, with the most memorable being when he saved Rocky Maivia during a three-on-one attack by The Sultan, The Iron Sheik and Bob Backlund at WrestleMania XIII. The father-son combo beat up the bad guys and I thought it would lead to at least a one and done tag team match for the combo. It never did though.

Regardless, both Johnson and Atlas were a big part of my early fandom days. From their time as tag team champions, to their stints as singles Superstars, I appreciate what each man did for the business. I consider myself lucky to have been on hand to see each go into the Hall of Fame.
Posted by Kevin Hunsperger at 12:49 PM