Over the weekend I encountered one of the most humbling experiences of my life. I was
asked to co-emcee the Relay for Life of Williamson County for the American Cancer Society. My buddy, Tom Harness and I did our best to encourage those in attendance to donate and help support the projects in this area and the research efforts happening on a grander scale.

The evening started with a song by a young girl who has bravely fought a brain tumor the last two years. Six year old Isabella Borgens moved everyone to tears with her rendition of "Fight Song" to kick off the 2016 Relay for Life. Survivors and caregivers then walked the first lap of the night.

Throughout the evening I met and talked to many survivors and people still fighting the disease. Cancer does not discriminate. It does not care what race you are, what religion you practice or how old you are. Men, women, children, rich, poor, gay or straight. Anyone can be diagnosed.

Besides their cancer diagnosis, the people I met Saturday night had something else in common: HOPE. Each one of them smiled and spoke with such positivity it was encouraging. As new treatments and advancement are made, we know the phrase "you have cancer" is no longer a death sentence. There were plenty of fighters to prove that.

During the chalk lap, I took a moment to honor my mom who is in remission from bladder cancer. She received her last treatment more than three years ago and continues to be closely watched by her doctors. She fought very hard, stayed positive and had a lot of people praying for her and her doctors. I also remembered three friends who had their lives cut short by this dreadful disease. 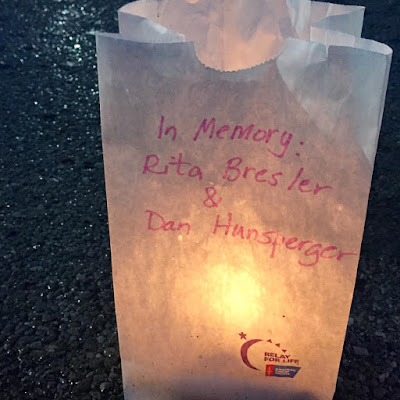 The rain didn't dampen the spirit of the luminaria ceremony. Hundreds of paper bags with the names of survivors or people who have died served as a reminder of why we were all there Saturday night. I remembered my Aunt Rita and Uncle Dan who each died of cancer.

Even though storms coming through ended the evening earlier, I learned that HOPE goes a long way. This disease is horrible and even though some people do die from it, there are many who don't. More birthdays are being celebrated, thanks to the support given to programs like Relay for Life. Learn more here.
Posted by Kevin Hunsperger at 2:21 PM