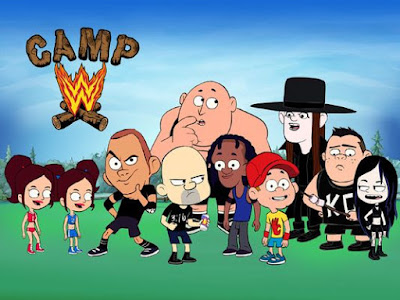 Over the course of the last several weeks I've become a big fan of Camp WWE. I'll be honest, I was worried that I would not embrace the show. When the ads first came out for it, I was expecting another byproduct of the PG era of WWE programming, and I had no problem with that.

Then I heard it was going to be more Adult Swim in nature. I never really watched Adult Swim so I had no idea what to expect. I've been pleasantly surprised with the characters and stories coming from Camp WWE. I think part of the appeal for me is that viewers are in on the behind the scenes chatter we all read about, but they put a comedic twist on it. 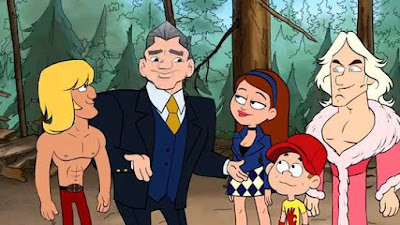 John Cena and Vince McMahon are my two favorite characters. I picture Vince actually sitting there reading his script as he's voicing what his animated self is saying and wondering his thoughts. The scenarios are sometimes over the top ridiculous, while other times they're spot on. Eight year old John Cena is the kiss ass of the camp, much like how many fans view him today. Some of the jokes are clearly hitting close to home.

I recently had the chance to interview Evan Michael Lee who does the voice of Mark Henry on Camp WWE. You can listen to the full conversation here. Lee shares some of his experience before finally being asked to join the cast. I'd like to see more of Henry in upcoming show. The series is a FAR cry from Hulk Hogan's Rock 'n Wrestling, but I like. 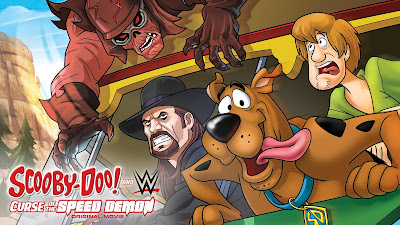 WWE is also releasing another Scooby-Doo film. This time Superstars like The Undertaker, Triple H and Kofi Kingston are part of Scooby-Doo! and WWE: Curse of the Speed Demon. It'll be released on BlueRay and DVD August 9 ahead of SummerSlam and is a followup to Scooby Doo! WrestleMania Mystery.  Another classic cartoon has teamed up in the past for The Flintstones & WWE: Stone Age SmackDown!

Partnerships like the ones established are serving the WWE well as the company strives to take things outside the ring and entertain new generations of fans. It's also getting an older generation attached to new stories and silly situations.
Posted by Kevin Hunsperger at 2:23 PM