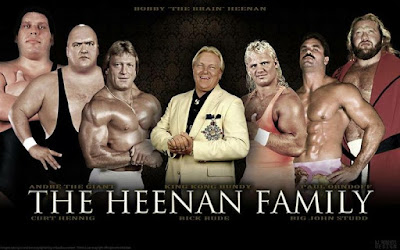 Bobby "The Brain" Heenan is the greatest wrestling manager of all time. When I put together a list of my five favorite wrestling personalities Heenan is on that list. I can't say enough about the Brain.

A few of my favorite Heenan moments (too many to really list) include the night I met my idol. It was January 1998 and I was about two months into my career as a journalist. I was able to cover a WCW Thunder show happening in Huntsville, Alabama. Before the show started the WCW marketing team hooked me up with some talent to interview. When The Brain came out to the interview area I nearly lost it. I only wish I didn't sound like such an idiot during our talk, but Bobby was great and made me feel at ease.

Watching Bobby in and out of the ring as a manager was always a good time. My brother and I would laugh at how Heenan would start something with the good guy and then try to run away. He was almost always caught and suffered a beating at the hands of good guys like Andre the Giant, Hulk Hogan or The British Bulldogs.

In 1989 Heenan's first family member in the WWF, "Ravishing" Rick Rude, won gold. Rude pinned the Ultimate Warrior at WrestleMania V and captured the Intercontinental title. Re-watching the show, The Brain was clearly trying to tie the lace on Warrior's boot while he was suplexing Rude back into the ring. A few months later The Brain Busters would capture the tag team titles. Heenan was on a role and even stepped through the ropes battling Warrior in a series of weasel costume matches. I'll let you figure out who won those contests.

During this time he was doing color commentary too. He and Gorilla Monsoon made a great team, in large part thanks to Heenan's quick wit. In 1991 one of my favorite moments in all of wrestling happened. I still get goosebumps when I watch the clip of Bobby holding the WCW Heavyweight title and announcing the "real world's champion" would be coming to the WWF.

Heenan stuck around a couple more years after that, mostly doing commentary on Raw and pay per views. His managerial days had come to an end. Then in December 1993, then WWF President Gorilla Monsoon tossed Heenan out of the building during Monday Night Raw. It was more than a decade before he'd be back with the company (WrestleMania XX and his Hall of Fame induction).

I still enjoyed Heenan's work in WCW, but he was obviously a WWF guy. He's had a handful of serious health problems over the past few years. I'm glad I've had the chance to not only meet, but also interview one of my all-time favorites. I attempted to honor him with my costume at WrestleMania 27. The Brain is truly one of a kind, a legend and someone I still look up to today.