My Wrestling Year in Review 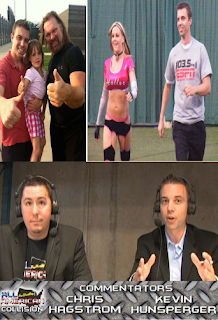 This is more of a personal year in review.  I'm going to talk about some of the highlights of 2011 for me in terms of wrestling, and quite honestly there are so many.  I'd have to say this was the best year for me terms of wrestling.  It was the first full year that this blog has been up and running and as of this entry, we're at more than 104,000 page views since September 2010.  The My 1-2-3 Cents YouTube channel is also picking up steam, something that I'm proud of and vow to work harder on in 2012.

The most popular aspect of the YouTube channel is all the One on One Wrestling interviews I have posted.  In 2011 alone, I've interviewed Mickie James, D'Lo Brown, Lex Luger, Nikita Koloff, and Hacksaw Jim Duggan.  All of them were awesome to talk with.  There's no way to pick just one specific highlight from doing these interviews, so collectively I would say having the opportunity to sit down with all of them throughout the year has been an amazing experience.  I will say that my interviews with Lex and Nikita (they were at a local church together) went more than 20 minutes.  Much longer than I had anticipated because I knew they were both busy, but I thank all these legends who took the time to talk with me.

Another highlight of 2011 was getting the chance to serve as a "manager" to Impact Wrestling Knockout Velvet Sky.  It was part of the summer Basebrawl event at our local ballpark.  I won a contest on ESPN Radio.  She wrestled Angelina Love that night, who had Winter in her corner.  I basically wondered around outside the ring and prevent Winter from interfering.  It's something I never imagined I'd get the chance to do, and while I didn't look like Bobby Heenan or Jimmy Hart out there it was a great time.


Attending my fifth Wrestlemania was a lot of fun this year too. Chad and I were joined in Atlanta by our fellow My 1-2-3 Center Travis.  Travis and I flew down together and ran into Mean Gene Okerlund at the airport.  He agreed to let us get a picture with him.  Very cool considering it was a busy airport and he probably had other places to be.  Of course the posse dressed the part of Wrestlemania as well.  We went as the Heenan family, I was the Brain.  Chad played the Red Rooster and Travis dressed as the Brooklyn Brawler.  One thing that sticks out to me about that day wasn't so much Mania, but earlier in the day we attended the WrestleReunion event a few blocks away and Terri Runnels spotted me in the crowd and asked to have a picture taken.  That was plain awesome.  Travis and Chad had moved ahead in the room, but when she got a glimpse of them, we posed for another shot. 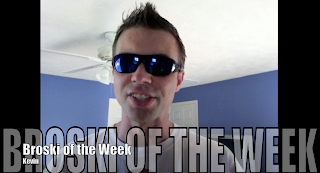 The Ryder Revolution really took off this year too with Zack Ryder creating a YouTube channel in an effort to get over with the fans.  Clearly it worked, as he is now the reigning U.S. Champion.  As he was rising to the top, he asked viewers to submit videos to become the esteemed "Broski of the Week."  I'm proud to say that I'm Episode 22's BOTW.  Woo, woo, woo! You know it!  While there's no cash prize involved, it's one of those things that just makes you feel good.

While all those events were awesome this year, I'd have to say the biggest highlight was being asked to be the color commentator for All American Pro Wrestling.  I've talked about it a lot on this blog, but having the opportunity to be a part of a local independent wrestling show is something I've dreamed about for years.  Now I'm living that dream.  AAPW Collision is going strong and showcasing the talents of a lot of local wrestlers.

Something else I'll be doing in the new year, which will likely be a highlight for the 2012 blog is wrestling in my first match.  The Masterpiece Mike Masters has challenged me, and I've relunctalently accepted.  I'll be sharing more details about that in the coming days, but I can tell you if you live within a driving distance of Marion, Illinois, it'll worth the drive.  Besides the hard working stars of AAPW, internationally known wrestlers PAC, El Generico, and Colt Cabana will be coming to town.  It's Saturday, January 14.  Click here for ticket info!

Of course without you readers, this blog wouldn't even exist, so once again, I thank you for your readership and look forward to writing more stories in 2012.  Your feedback (good and bad) is always welcome too.  Don't forget, like us on Facebook and follow us on Twitter.
Posted by Kevin Hunsperger at 2:49 PM