Hellfire and brimstone, it's Kane, it's Kane, it's Kane.  The Big Red Machine made his return to the WWE on Monday night, attacking John Cena during his match against Mark Henry.  I firmly believe Kane's intended target was the World's Strongest Man, since he's the one who took him out, but I suspect they're saving that match perhaps for the Royal Rumble.

The thing about Kane's return is everyone is buzzing about that mask.  There's also speculation that the former world champion is not Glen Jacobs, the man who has played Kane for the last 14 years.  That of course is crazy.  Clearly, it's the same man behind the mask.

Now that the recap is out of the way, let's get to the Christmas wish.  And we know Jacobs has a history with Christmas as he played the Christmas Creature nearly 20 years ago.  Click here to read more about that.  Anyway, my wish is simply for a different mask.  I don't mind the fact that they're taking him back to his roots, but I don't really like the look of the particular mask he's wearing now.  I know that probably sounds really lame and petty, but hey, it's my blog and My 1-2-3 Cents. 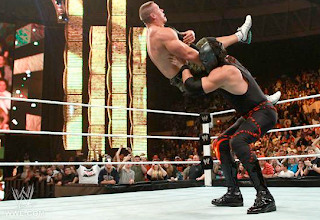 My other wish for Kane is for him to get his shot against Henry.  Like I said, it'll likely be at the Royal Rumble.  I don't want to see another world title run for Kane, but I would like to see him get one more shot at the gold before perhaps helping to put over some of the younger talent.  Let's face reality here, Kane is in his 40's now, this is a young man's game, it's time to pass the torch.  What better way than now for guys like Kane, Big Show, and in the upcoming year Mark Henry to start putting over guys like Daniel Bryan, Dolph Ziggler, and Zack Ryder.

Another wish for Kane, and this is to squash the rumors I've been reading, I hope he's not going to be the one to face Undertaker at Wrestlemania.  These two have wrestled two times before at Mania and have had countless encounters since 1997.