I recently wrote a blog were I presumed John Morrison was finished with the company.  It was being pegged as his "last Raw" by folks online.  I jumped on the bandwagon and bought into that hype as well.  Of course I don't know for sure, but because they're still talking about Morrison on Raw, I have a feeling we haven't seen the last of JoMo.

And that's my Christmas wish for him.  I hope that he comes back to the WWE sooner rather than later.  I still think he's one of the best talents in the ring right now.  Like I said in my previous post, he is still developing on the mic, but that shouldn't be a hindrance for someone with the athletic ability of Morrison. 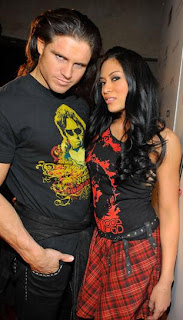 Assuming he comes back, I hope there's a big push involved too.  And quite honestly, I'd like to see a heel turn for him.  I always enjoyed his work as a "bad guy" anyway.  I see hims as a cool, cocky, even narcissistic heel.  Depending on when (and if) he returns, I'd also hope that the WWE would start grooming him for that next step.  He's been an Intercontinental and world tag team champion.  He's held his own with former WWE champ the Miz and CM Punk, so let's see him move up that later a bit.  Perhaps he could be the third member of the Vicki Guerrero family along with Dolph Ziggler and Jack Swagger.

While we're on the subject, I'd like to see the WWE bring Melina back into the company too.  She could help boost the Divas division and could also play a role with Morrison's future, whether as a fellow member of a heel faction or as JoMo's manager.