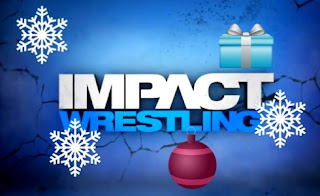 I will be honest, I haven't watched much TNA/Impact Wrestling, so I'm not going to be overly critical with this post.  Some of the positive things I've seen in recent months is the crowning of Bobby Roode as the TNA heavyweight champion.  This was a move that needed to be made.

I really like the fact that they've decided to go with a TNA superstar here.  By that I mean Roode never competed in the WWE.  It's refreshing that a non-WWE star is now representing the company.  So naturally the wish here is that trend will continue in the new year.

Roode has a title defense against former friend AJ Styles at Final Resolution.  So even if Roode loses the title, the belt will still be with another non WWE performer.  The same can't be said for all the titles right now, but with so many former stars from WWE on the roster, that's hard to control.

The last time I really watched the show, they were pushing a Garrett Bischoff vs. Eric Bischoff feud.  I'm not even sure if that ever happened, but for the sake of the fans, I hope it didn't and doesn't.  If Garrett wants to wrestle that's fine, but I'm really over Eric being in any kind of program.  Make him a manager, but please keep him out of the ring.

I said I wasn't going to rant too much on this, and I'm going to keep my word.  I will close by saying Jeff Hardy is in another high profile matchup on the PPV.  I really hope for his sake (and our's) that he is clean and sober and will stay that way.  It's not fair to the fans, the company, or the other performers if he is still making the same mistakes he made earlier this year.

So let's applaud the move of making Roode champion.  Let's hope the company will look at some of the other hidden talents on their roster and start using them the right way too.
Posted by Kevin Hunsperger at 4:18 PM