Why My TV Has a Mute Button


By Kevin Hunsperger
@kevinhunsperger on Twitter
(All photos from WWE)

I am beyond disappointed in the outcome of the "Michael Cole Challenge" from the November 14 episode of Monday Night Raw.  I figured the whole thing would be gimmicked and a way to make JR look bad, and unfortunately I was right.  I know no one from the WWE will actually see this post, but I'm going to vent and share my thoughts and feelings anyway.  I hope you'll read all of it and post your thoughts as well.

First of all, what is the point of the countless humiliating jabs taken at Jim Ross?  The man is a Hall of Famer, but more importantly, JR is a LEGEND.  He is the greatest commentary of all time as far as I'm concerned, and he is the voice of a generation.  That voice has been silenced by an obnoxious, over the top heel character played by Michael Cole.  Seriously, WWE, what are you thinking?  Response to this new version of Michael Cole is overwhelmingly negative.  I sometimes watch with the TV muted because I do not want to hear the constant bickering between Jerry Lawler and Cole.  This hurts your product.  Not one time have I ever muted the show while JR and the King were on the announce team.

I believe that the current state of announcers can be attributed to a drop in ratings.  I have no proof of this, but who wants to hear the crap spewing from Michael Cole every week.  And yes, I get it, he's playing a character, I just can't understand why the WWE would want to create such an annoying figure and run the risk of people not listening to the show or worse, changing the channel.

So here are a few hypothetical questions I have for the WWE creative teams.

If Triple H is the COO of the WWE, shouldn't he have more clout than the Raw General Manager?

The fans clearly love JR, so why wouldn't Teddy Long then hire Ross and replace Cole with him on Friday Night SmackDown!?

I understand the need for a heel announcer, but why develop such an irritating character who does more to put himself over than the action in the ring?

Maybe there's something bigger here.  Maybe JR doesn't want to come back to full time commentary.  I just don't like the way they're keeping him off TV.  There's no need for the constant fat jokes.  For a company that vows to put an end to bullying, there are a lot of characters on that show who seem to be bullies to me.

Now, what would I do with Michael Cole?  Glad you asked.  I've talked about it before, I'll say it again. Make him a manager.  Previously I would have paired him with Jack Swagger, but I like the fact that he's now with Vicki Guerrero.  The WWE is touting the return of Brodus Clay.  I'd make Cole the official mouthpiece for the big man.  The two would work well together.  Cole could do the talking, and Clay would be the brawn who bails his manager out of trouble.  I'd also turn Mason Ryan back to a heel. I think he'd be better off. The WWE could repackage Michael McGillicutty and David Otunga and turn them into a legitimate tag team.  Then they'll kill two birds with one stone and have another tag team to compete and create a new manager. 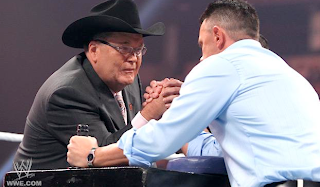 I know wrestling is a work.  But it seriously disappoints me that Michael Cole is now viewed as "the Voice" of the WWE.  His heel character on the announce team is over the top and obnoxious.  It would be better served as the leader of a heel stable.