So less than a month after attempting to win the TNA World title at Bound for Glory, Bobby Roode has defeated his former tag team partner for the title.  I'm still not sure how to digest this development.  I think my biggest problem with the victory is that this is the second title change in less than a month.  That's a pet peeve of mine with both WWE and TNA, so I'm not just picking on them just for that.

I really wanted James Storm to have a shot as champion.  If the plan was to put the belt on Bobby Roode all along, I don't get why they made Storm the paper champ.  I understand they turned Roode heel in the process, but why not have him beat Kurt Angle for the title at BFG and then turn him heel?  They could have set up a scenario where Storm (or AJ Styles) asks Roode for a title match, since they're all friends.  Roode could have accepted said challenge, then cheat to win and turn his back on his friends.  I'm just throwing out a possible scenario here. 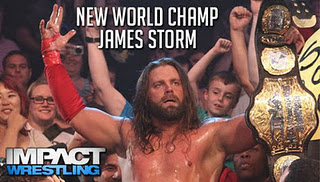 The other thing I don't understand is WHY was Samoa Joe even in the number one contender's match last week?  That made no sense to me, as Joe has been doing a lot of jobbing lately.  But perhaps this is the turning point (no pun intended) for TNA.  Even though I wish they would have originally gone with a Roode title win over Angle, I still find it refreshing that they're pushing talent who didn't work previously for WCW or WWE.

Bobby Roode seems like the real deal.  I liked his work with Storm as Beer Money, so I think the two will give us some enjoyable matches.  Now only if they'd take the focus off of Eric Bischoff and his son and pay more attention to the title picture and the new talent on top.
Posted by Kevin Hunsperger at 5:13 AM