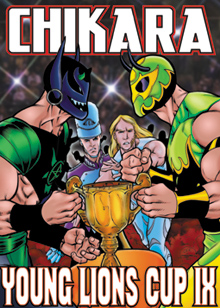 When I started formulating ideas for what topics to cover in this Countdown to High Noon series, I realized if I was trying to persuade people as to why they should watch Chikara, I needed to highlight the differences between the "wrestling" they see on TV on a weekly basis. Yesterday I tried to explain how important tag team wrestling was to the Chikara foundation. Today the focus is on the Young Lions.

There has been a lot of criticism towards TNA and WWE for using wrestlers that are long in the tooth instead of utilizing newer potential stars. In Chikara, it’s practically the opposite. Chikara’s roster is primarily made up of graduates of the Chikara Wrestle Factory. Over the past year there has been a steady influx of outside talents appearing on Chikara shows, but even then the talent is usually some relative young talent rather than an experienced veteran. There are exceptions, such as Johnny Saint and Johnny Kidd appearing on the Chikarasurus Rex weekend of shows and Marty Jannetty was scheduled to make his Chikara debut on October 29. For the most part though, when watching a Chikara show, fans are treated to young and hungry talent that wants to prove themselves.

Young talent has been such a focal point for Chikara that up until November 13, the only singles title the company has had during its tenure is the Young Lions Cup. Each year there is a tournament, usually held in July, to crown a new Young Lion’s Cup champion. The winner will then defend the title until the next tournament. The tournament is open to any competitor 25 years of age or younger.

The 2011 Young Lions Cup tournament saw the first over 25 competitor. Archibald Peck was initially listed for the tournament before Chikara Director of Fun, Wink Vavasseur found out Peck didn’t fall into the age limit restrictions. After being ousted from the tournament, "Marching" Archie got his barrister R.D. Evans to file an injunction claiming due to America not using the metric system; Chikara was falsely determining his age. Or something like that. Check out the video.


Some detractors could say because Chikara uses guys who are fresh out of wrestling school or guys that don’t have a lot of experience the wrestling on the shows suffer. I would argue that such detractors have never watched a Chikara show. Sure there is the occasional botched move and occasionally guys may look a little lost during a match. But those things happen to even the most seasoned wrestler. I would gladly put up any match by Frightmare, The Colony, The Osirian Portal and other Chikara wrestlers past and present against some of the "experienced" wrestlers in other companies and would be shocked if the Young Lions not only held their own, but also had a better match.

I have nothing more to add. Simply put, Chikara is home to the best young talent in the business. If you’re not familiar with them, you are missing out. I’ll leave you with a highlight video from this year’s Young Lion’s Cup tournament.


Once again, High Noon is only $15 and can be ordered by clicking here.  As of now there are 5 matches announced so that’s $3 a match. Quite the bargain.  For more on Chikara check out their website, and  keep up to date with their official YouTube channel.

And of course, follow My123Cents on Facebook, Twitter , and YouTube. Tomorrow we look at the commentation station. Even though there have been several Young Lions Cup holders, only one can claim to be the best ever. I leave you with Tim Donst’s hit video, "Who Is the Man."

Posted by Kevin Hunsperger at 1:07 PM