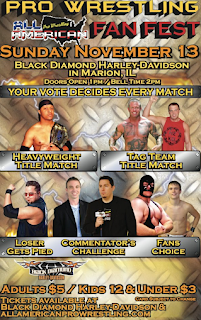 Since Chad has been doing a Chikara preview of High Noon (coming to Internet pay per view on November 13), I decided it was prudent for me to plug the wrestling show I'll be a part of that day.  This will affect fans in southern Illinois, southeast Missouri, western Kentucky, and northwestern Tennessee mostly, but anyone can watch All American Pro Wrestling "Collision" online anytime.  Just click this link for past episodes.

Coming up on Sunday, November 13, we are putting together a Fan Fest.  It's a truly interactive event and the fans will decide the matches we do that afternoon (2 p.m. at Black Diamond Harley Davidson in Marion, IL)  AAPW Champion Edmund "Livewire" McGuire will defend his title against one of five opponents.  Fans can choose from "Old School Warrior" Ax Alwardt,  "3G" Eric Wayne, KC Jackson, the Mississippi Madman, and the undefeated Pokerface.  No matter who the fans pick, this will be a great contest.

Someone's going to get a pie in the face as "The Golden Boy" Greg Anthony takes on the opponent of the fans choosing.  They include: Chris O'Neal, "Dynamite" Seth Knight, Mike Masters, Christian Rose, and the All American.  Again, whoever loses this contest will take a pie to the face.

And finally, the "match" my broadcast colleague Chris Hagstrom (who's also the new promoter and Executive producer of the show).  Fans will decide if Chris and I will have a dance off, a pose down, a pie eating contest, a hotdog eating contest, or best imitation.  I'm looking forward to this, as it's meant to be a fun part of the Fan Fest experience.

Here's the catch though, you only have until Sunday night, November 6 to make a decision.  Voting ends at 6 p.m. CST, so again, head to AAPW's website and vote.  If you live in the area, head out on November 13, doors open at 1 p.m., belltime is 2 p.m. at Black Diamond Harley Davidson in Marion.  Also, check out other upcoming events.  The first season on WSIL TV 3 is going well, and we hope that you will continue to support All American Pro Wrestling!
Posted by Kevin Hunsperger at 9:33 PM