All American Pro Wrestling in southern Illinois is gearing up for its biggest show ever.  And I'm proud to say that I am a part of it.  For those who don't know or remember, I do color commentary for our biweekly AAPW Collision.  Click here to watch on line.

Anyway, on January 14, 2012 it's AAPW Main Event.  And the company has sought out three of indy wrestling's biggest names.  Colt Cabana, PAC, and El Generico will all be featured on the card.  It should be an epic evening of fast paced, high energy, family friendly, and fun wrestling. 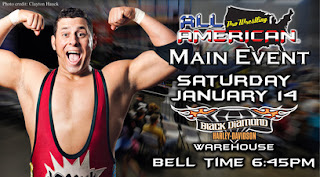 Of course these three stars will supplement the roster of talented young men (and a couple of women, it's one of AAPW's first ladies matches) in the new year.  I'm looking forward to being able to call the action.  It's my hope that the three big name guys coming in, along with our current stars will help make for a memorable evening in Marion.  The show by the way is at 6:45 p.m. at Black Diamond Harley Davidson.  Tickets are cheap too, so you can bring the whole family.

My broadcast colleague and AAPW Executive Producer Chris Hagstrom had this to say about the announcement, "We know our fans love seeing our local performers, but bringing in stars like Cabana, El Generico, and PAC, who are recognized not only nationally, but internationally, as well, will only enhance the caliber of our show and the experience of the fans."

I'll be honest with you, up until about a month ago, I had no idea who PAC was.  Adam Testa, AAPW marketing director, sent me a link to some of his matches.  You can check that out by clicking here.  PAC is an amazing talent in the ring.  His high intensity moves should keep fans on the edge of their seats throughout the night.

I know a little bit more about El Generico.  Chad has talked about him and shared a few DVDs with me featuring Generico.  Most recently he was the Ring of Honor TV Champion.  Although he never had a chance to successfully defend that title (he lost it to Jay Lethal in his first defense), I like his style.  He should add something special to the evening on the 14th of January.

Then there's Boom Boom Colt Cabana.  I'm a fan of his having listened to his podcast "The Art of Wrestling" for the last few months and of course looking up some of his matches on line.  Colt had a very brief run in the WWE as Scotty Goldman a couple of years ago.  But with the recent rebellion by CM Punk on Raw, we've heard Colt's name dropped a couple of times on air.  It would be great to see him come back to the E without some lame ass gimmick, but for the time being, I'm enjoying his work in the indies and listening to his always entertaining podcast.

The evening will also feature AAPW champion, Edmund "Livewire" McGuire defending his title against whoever is deemed the number one contender on the December 10th episode of Collision.  It'll either be the 450 pound Mississippi Madman or "The Old School Warrior" Ax Allwardt.  That'll be a great match too.

Mike Masters has been on a big losing streak and has been pointing the finger of blame at me.  Find out on the 10th why exactly he thinks it's my fault that he's losing, and what he intends to do about it.

Again, I appreciate those of you who read the blog and support us on Facebook, Twitter, and YouTube. Please check out AAPW on Facebook as well and like the page.  They'll be giving away prizes when they reach benchmarks too.
Posted by Kevin Hunsperger at 2:55 PM