I've been on an unintentional blogging hiatus the last couple of days, mostly because Chad has been writing up reviews of past Survivor Series events.  After a busy Saturday, I'm finally getting to sit down and share some thoughts from 1987.  It's hard to believe that Sunday will be the 25th annual Survivor Series.

I can still remember the first one like it was yesterday.  Well, almost like it was yesterday.  I was a freshman in high school and one of my classmates had ordered the pay per view.  He came to school that Monday after (remember it was on Thanksgiving back then) and talked about the event.  Bobby told me the unimaginable that Monday during lunch.  Hulk Hogan and his team went down in defeat to Andre the Giant's team.  You see, back then I was a devout Hulkamanic and the thought of Hogan losing to Andre made me sick. 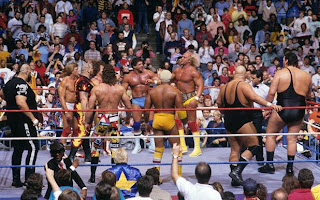 I couldn't believe it.  I wouldn't believe it.  At least not until the following Sunday when the results were announced on Superstars.  But at least the Hulkster got some saving grace and attacked the Giant after his team lost.  I couldn't wait for the Survivor Series to come out on VHS.  Again, back then there was no Internet to provide the results and those of us without PPV capability had to wait for the WWF to release events on tape.

That first Survivor Series in 1987 laid the groundwork for what would become one of my favorite PPV concepts.  I loved the idea of the elimination matches, and I'm disappointed the WWE has turned the event into just another PPV.  It started off so unique, but has become so watered down.  It's a major bummer.  I've blogged and vlogged about that in the past, so I won't bore you again with those details.

Instead, I'm going to leave you with some Survivor Series fun facts.  Thanks to Chad for some of these.

*Glenn Jacobs is the only superstar to appear at three consecutive Survivor Series pay per views with three different gimmicks.  In 1995 he was Dr. Isaac Yankem.  A year later, he became the Fake Diesel.  Finally in 1997 the Kane gimmick caught fire and he's been the Big Red Machine ever since.

*The 1991 event was the first to feature a non-elimination tag team match.  It was the World title match between Hulk Hogan and the Undertaker.  Hogan lost the title after Ric Flair interfered.

*And on the flip side, the 1992 Survivor Series only had ONE elimination match.  The Nasty Boys and the Natural Disasters beat Money Inc. and the Beverly Brothers.

*King Kong Bundy and Bam Bam Bigelow were on opposing teams at the 1987 Survivor Series, but were the sole survivors for their team at the 1994 event. 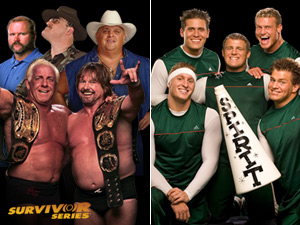 *I must admit I marked out when Team Legends: Ric Flair, Sgt. Slaughter, Ron Simmons, and Dusty Rhodes beat the Spirit Squad in 2006.  By the way, Dusty pinned Nicky (now Dolph Ziggler) in that match.  Simmons replaced Roddy Piper in the match and I don't remember why.  I think this might have been around the time of Piper's battle with cancer.  Arn Anderson was in the corner for the legends as was one of the members of the Spirit Squad for his team.

There you have it, some quick memories about Survivor Series.  The first five events are my favorites, just because they focused more on the whole concept of survival.  Events that came after that have stood the test of time too like Chad has mentioned in his last few blogs.  Anyway, we're just hours away from the 2011 installment, the 25th Survivor Series.  What are some of your favorite ones?  Post here or like us on Facebook and follow us on Twitter to leave your opinions.
Posted by Kevin Hunsperger at 9:44 PM