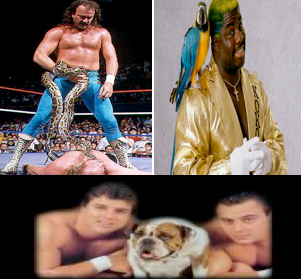 By Kevin Hunsperger
@kevinhunsperger & @my123cents on Twitter
(Photos are from WWE.)

Part of the big boom of wrestling in the 1980's was the fact that Vince McMahon was trying to make the product more kid friendly.  If you think the PG environment today "sucks" (I do not), then you really would have hated the 80's.  This formula meant the use of all kinds of cartoony characters and larger than life gimmicks.  Real live animals also became a part of the show.

Perhaps the most famous wrestling animal (okay, he never wrestled, but you know what I mean) was Jake "the Snake" Roberts' pet python Damien.  When Jake arrived in the WWF in 1986, he was a dastardly dude.  He would knock out his opponent with the dreaded DDT.  Then after the match, he would open up his green sack and dump Damien onto his unconscious opponent.  Sometimes he would even stick the snake's head in the knocked out man's mouth.  The fans of course where horrified by these actions and would boo the Snake even more.

Then Jake turned baby face and fans would applaud the actions.  It seemed all of his opponents had a phobia of snakes.  This included the 500 plus pound Andre the Giant, who apparently was so afraid of snakes that he had a mock heart attack in the middle of the ring on a Saturday Night's Main Event back in 1988.  Then Andre eliminated himself from the 1989 Royal Rumble when Damien was slid into the ring by Roberts.  Others who were afraid of the snake included Big Bossman (who refused to retrieve the Million Dollar Belt from the bag, hence turning him face), "Ravishing" Rick Rude, and the Honky Tonk Man.  Earthquake was even so afraid of snakes that he delivered his patented splash to the bag containing Damien while Jake was tied up in the ropes.  Quake then served up "Snake Burgers" on an episode of Prime Time Wrestling.

It wasn't long after that incident that Roberts returned to his dastardly ways.  This time he sprung a snake attack on the Ultimate Warrior.  Then he held a cobra as it sank its "fangs" into the arm of a tied up "Macho Man" Randy Savage.  This action cemented Roberts as the most hated man in all of wrestling in 1991 and is still one of the most memorable things to happen on the old WWF Superstars show.

Ricky "the Dragon" Steamboat used fire to fight fire so to speak with Jake.  Actually it was reptile to fight reptile. Steamboat was feuding with Roberts at the time and he used a small alligator in some of his matches.  If I remember correctly though, the gator was only used briefly and mostly during just the matches against Roberts.  It's a good thing Skinner wasn't around when this feud was happening...

The British Bulldogs were my favorite tag team back then, and still remain in my top 5 of all time.  Part of their gimmick included the use of a bulldog of course.  Matilda was the beloved sidekick for this team.  She would chase evil managers around the ring prior to a match.  I can remember her nipping at the heels of Slick, Jimmy Hart, and Bobby "the Brain" Heenan.  And it was Heenan who took exception to this and he and his Islanders dog napped the pooch.  The dog was so popular that the WWF started a campaign for fans to send letters of support for the dog.  The company was also able to market a plush version of Matilda.

The kidnapping set up a feud between the Islanders and the Bulldogs and culminated with a six man tag team match at Wrestlemania 4, with Heenan dressed as a dog catcher to protect himself from the dog.  The heel team even went over that night, and the Bulldogs soon left the company.

Then when Davey Boy Smith returned on his own in 1991, he brought a new pooch.  This time it was Winston, but I don't remember him being around too long.  However, there was an episode of Prime Time when Heenan nabbed him and it was all caught on tape.  DBS took care of business right there that night in the studio.

Koko B. Ware was much milder with his pet bird Frankie.  Dubbed the "Birdman", Koko came to the ring dressed in bright colors, just like his beloved mascot.  Fans would flap their arms like a bird when Koko came out and would celebrate with him when he won a match.  I don't recall anything bad ever happening to Frankie in terms of storylines, nor do I recall Frankie ever doing anything hurtful to anyone.  Sadly though, Frankie did perish in a house fire at Koko's home several years ago.

These are the animals that immediately came to mind when this idea was presented to me (thanks Chad).  I'm sure there are others that I've forgotten. Al Snow's dog Pepper during the Attitude Era ended up as dinner for the Big Bossman.  There were also Bad News Brown's sewer rats during his feud with Jake, but I don't recall ever seeing a rat.  And I recall someone riding a horse to the ring, at least briefly, but I don't remember who.