In case you didn't know, September 19 is International Talk Like a Pirate Day.  So, get ready to walk thee plank and learn more about some of wrestling's best (and worst) pirate gimmicks.


I'll admit, I didn't remember a whole lot about the "Pirate" Paul Burchill gimmick.  Of course I remember Burchill did the gimmick, but until I did a little online research I had forgotten how it all came about.  To me, this was one of those gimmicks the WWE could have cashed in with the popularity of the Pirates of the Caribbean films.


Burchill seemed to be over initially with the gimmick and he really did look like a pirate.  Personally, I've never been into that genre of characters so for me, it was just another guy out there trying to get over.  I had forgotten he would come swinging onto the entrance ramp like a swash buckler, that was pretty clever.  I give that some points for making the entrance a bit more entertaining.

While the fans seemed to enjoy the gimmick, the stories I have read say that Vince McMahon did not.  And at least one online report says that Vince was unaware of the Pirates of the Caribbean movie and that's part of the reason why the plug was pulled on the gimmick.  I believe it was Mark Henry (who was being booked as a monster back then too) put Burchill on the shelf after attacking him.  Then of course he returned with his "sister" Katie Lea in what was originally going to be an incestuous angle between the two.  Glad that idea was buried at sea, along with Burchill's pirate gimmick.

Jean Pierre LaFitte went from being a Quebecer to a pillaging pirate in 1995.  The original story line with him was that JPL was a direct descendant of real life pirate Jean LaFitte.  Of course that was just part of the act.  JPL was a heel, and Carl Ouellet did a good job with the character.  He ended up stealing items from Bret Hart, including his famed sun glasses and ring jacket.  Hart would get his revenge on the sticky fingered pirate at an In Your House pay per view.

This was the mid 90's, and a time when the WWE was at one of its lowest points.  Gimmicks like Mantaur, Aldo Montoya, and TL Hopper were running rampant.  Ouellet was a good worker, but again, I'm not crazy about pirates and I felt like the Quebecer gimmick was better done when Jacques Rougeau did it as the Mountie on his own in 1991.  Anyway, supposedly he was released from the company for having a conflict with the Kliq over the ending to a match against Diesel.  I don't know if that's true, but I've heard several stories like that about other guys parting ways with the WWF during that same time period, so I wouldn't be surprised. 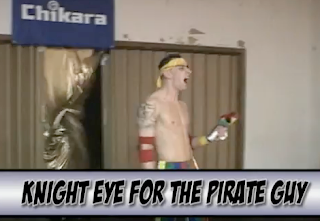 I had to turn to my Chikara Pro pro Chad for Jolly Roger.  He was the wrestling pirate of Chikara Pro.  Together he and Lance Steel were known as Knight Eye for the Pirate Guy, a tag team managed by Allison Danger.

From the looks of things, he did a lot of tag team work feuding a lot with the late, great "Sweet & Sour" Larry Sweeney.  Jolly Roger doesn't wrestle anymore.  It's my understanding he's been sidelined with an injury.  Although, he returned to the ring in 2010 for an 8 person tag team match, in which his team came up on the losing end.

As you can see from the picture, Roger isn't built like your typical wrestler.  But he did have a lot of charisma and of course got into the character, coming out dressed with bright, multi colored pirate pants, a patch, and a "pet" parrot.

These were the only pirate gimmicks that immediately came to mind.  Have I missed one?  What are your thoughts on this type of character?  Post your thoughts here or on Facebook, Twitter, or YouTube.
Arrrrrrrrrrrrrrrrrr!!!
Posted by Kevin Hunsperger at 3:27 PM