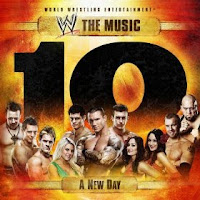 A reader asked for something to be written on wrestlers' theme music.  I believe it was Michael Hayes (or at least he takes credit for it) who was the first wrestler to use theme music on the way out to the ring.  Nearly 30 years later, it's become the standard.  I did like the brief period when Vladamir Koslov was that monster heel and came out to no music at all.

So here are some of my favorite theme songs over the years.  There in no particular order, just songs I have enjoyed.  And please, don't judge me.

One of my favorite themes of all time though is that of Goldust.  When he first debuted in 1995, he brought something different to the ring.  His look, the gimmick, the attitude.  This was all before the Attitude Era had officially launched.  Some might argue that he was before his time.  But every time the golden one's theme hits, I sit and listen.  I can't exactly say why I like it so much, it's just one of those themes I truly enjoy.

Woooo!  Ric Flair's theme 2001: A Space Odyessy is another one of my all time favorites.  I like this one so much, that the band at my wedding reception played it as my wife and I entered the room.  And once we were front and center, I let out a big "Wooooo!" I'm sure the Nature Boy would have been proud.

Everybody's gotta price.  Just ask Ted DiBiase.  I love the Million Dollar Man theme song.  Actually a lot of the themes from the 80's and early 90's really held up.  I think I liked them so much more back then because the song was more specific to the character or gimmick.  Today, you could have almost anyone come out to the music.

The whole countdown to the arrival of Y2J in the WWF back in 1999 was awesome.  I loved the clock that would pop up each week and when it was finally revealed as Chris Jericho and the music that accompanied him was a big mark out moment for me.  Yes, I was 26 years old and marking out, so what?  Great theme, I like it better than the one they did for his 2007 return.

Probably the cheesiest of all my choices, and maybe the cheesiest theme song of all time, but it told the story of the American Dream.  It has a lot of soul and I can still see Dusty Rhodes and Sweet Sapphire dancing in the ring.

And finally, who would have thought the old high school graduation standard "Pomp and Circumstance" could be so cool?  Only the "Macho Man" Randy Savage could pull this one off.  Face or heel, this was his theme and when I'm at a graduation ceremony to this day, I think of Macho Man and throw out a "Oooohhhhh yeeeeaaaahhh!"  Rest in Peace Macho Man.