With the anniversary of the 9/11 attacks around the corner, I felt it only appropriate to write a post on some of the most patriotic wrestlers.  On Veterans' Day, I wrote a piece about wrestlers who have served our country and some who played veterans too.  Here's a link to that post, I'm not going to repeat those guys here.

I would also argue that the term patriotic isn't just reserved for the red, white, and blue; for example the Iron Sheik, Mohammed Hussein, and Nikita Koloff were also patriotic as they showed love for their country.  But today I'm focusing on the American patriot.  Just wanted to get that out of the way. 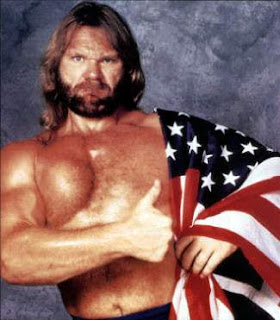 Hacksaw Jim Duggan was the embodiment of the stars and stripes in the late 1980's and early 90's in the WWF.  When he first arrived in the company he carried a 2x4 and the American flag.  His first feud was with the Iron Sheik and Nikolia Volkoff.  Duggan went on to feud with other anti Americans like Dino Bravo, Yokozuna, and Sgt. Slaughter (the Iraqi sympathizer).  Duggan's patriotism was infectious.  To this day, you can still hear people chant that loud U-S-A! U-S-A! just like ol' Hacksaw did.  Duggan also helped convert a few America haters.  Remember he teamed up with Volkoff briefly in 1990, after the fall of the Soviet Union.  The two beat the Orient Express at SummerSlam that year.  Duggan also embraced Sgt. Slaughter when the villian declared "I want my country back."

Duggan eventually left the WWF and headed to WCW.  He kept the America loving gimmick until he joined Team Canada.  Personally, I thought that was one of the all time lamest heel turns in history of wrestling.  I just couldn't get behind the character, nor see the logic in the turn.  It felt like WCW was trying to recreate Sgt. Slaughter's turn the WWF did several years earlier.  None the less, Duggan would go back to his America loving ways and still carries Old Glory on his way to the ring.

Less obvious about his patriotism was Kurt Angle.  He's been a heel most of his career, but with his red, white, and blue singlet he's a proud American.  Angle of course won two gold medals for Team USA in the 1996 Olympic games.  With that on his resume and his love of country, you'd think he would have been the perfect baby face patriot.  But instead, Angle used his pedigree to let everyone know he's better than them. 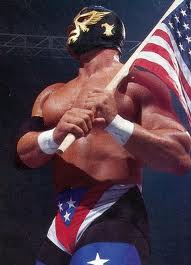 I don't remember a whole lot about the Patriot.  I watched him briefly on the old Global Wrestling and then with WCW.  He and Marcus Alexander Bagwell teamed up.  Then the Patriot brought his gimmick to the WWF.  He was on the scene in 1997, a time of flux in the company.  While his gimmick had been done before, I felt like the Patriot had some potential.  It seemed though that he was thrown into the upper card too fast.  The only matches I remember with him was the tag team flag match he and Vader lost to Bret Hart and Davey Boy Smith at the Badd Blood pay per view in St. Louis (I was in the crowd that night)  I'm pretty sure the Patriot was gone from the company shortly after that.  I don't think the fans bought him as a world title contender.  He never had that much star power in WCW and without changing the character, fans just wouldn't or couldn't accept him.  But during the Gulf War, he helped raise moral of American fans with his stars and stripes gimmick. 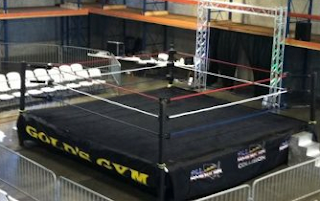 Finally, I've gotta plug All American Pro Wrestling.  Our new ring has red, white, and blue ropes.  And one of our stars, The All American is on the card.  Right now there's no anti American heel for him to feud with, so he's just making his way up the card.  Who knows who may show up to challenge his love of country though.  Plus, in these trying times for our country, I think we all need someone to remind us of our love for the good ol' U-S-A!

Obviously, these are just a few of wrestling's most patriotic stars.  Can't forget about Hulk Hogan from the 80's and early 90's.  Mr. America, remember him?  And the tag team of the Patriots from NWA/WCW.