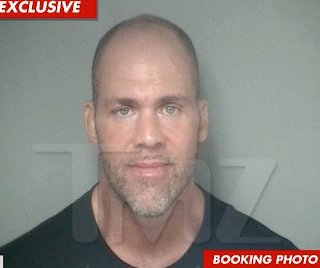 I’m a few days late on this which is fine because it’s given Kurt Angle time to make idiotic claims trying to defend himself. In case you’ve been living under a rock for the past week, Kurt Angle was arrested on Sunday on suspicion of driving under the influence. Kurt has said the Breathalyzer test showed his blood alcohol level was .06 which puts him in the legally acceptable range for drinking and driving.  The arresting officer claims Kurt blew a .09 and failed several sobriety tests. Call me crazy but I’m more inclined to believe an officer I’ve never heard of over Kurt Angle who has made several borderline crazy comments in interviews over the past few years.

This is Kurt’s second DUI “allegation” this year and comes just a couple weeks after Matt Hardy was fired from TNA for a similar offense. To date the only statement TNA has made regarding Kurt Angle is announcing what upcoming house shows he will be appearing.  While TNA isn’t a public company like WWE so they don’t have shareholders to answer to, their lack of comment on the situation says a lot.

Currently, Kurt is the TNA World Champion and is set to defend the title at the No Surrender pay per view this Sunday, September 11 against Sting and Mr. Anderson. Normally after a situation like the arrest, fans could expect the champion to lose the title as a form of punishment. However with TNA’s biggest show of the year being next month featuring a title match they’ve actually been building to for the past five months, I don’t know if I see them switching the title to someone else simply for the sake of punishing Kurt. Plus, Sting just lost the title to Kurt last month and Mr. Anderson has gone face to heel to face in the last six weeks so putting the title on him wouldn’t make much sense. Then again, this is TNA and logic has never been a strong point.

As I started to compare a couple paragraphs ago, given TNA recently fired a top name wrestler using same legal problem as the reasoning, if they do nothing concerning Kurt, it will send a very clear message there are double standards for TNA talent.  Allegedly, Matt Hardy had some backstage issues working against him while Kurt has been a company man since signing with TNA 5 years ago and that’s the reason why nothing has been publicly said or done by TNA so far. That may be true, but TNA should realize drinking and driving is a serious issue. I’ll admit I have a strong intolerance to drinking and driving due to knowing three people who have been killed by drunk drivers, so my feelings towards Kurt and Matt’s stupidity is probably a little harsher than most other people. Given this is Kurt’s second offense this year, what will need to happen before TNA management steps in and tries to get Kurt to understand his careless decision could have potentially fatal consequences?

With Jeff Hardy making his return, I feel TNA is sitting on a potential powder keg for bad publicity. TNA needs to step in, set up a wellness program similar to WWE and realize even drinking and driving is nothing to take lightly. Will it take a death or serious injury before TNA starts to put personal health above potential profits?