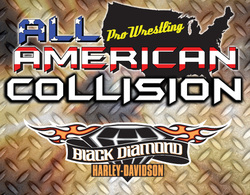 I'm going to be up front (like always) with this post from the start.  I am biased in this one because of my association with All American Pro Wrestling.  But I'm writing this as a part of that company and as a wrestling fan.  Some haters may think I'm chewing on sour grapes, but please read the entire post before passing judgment.

I live and work in southern Illinois (which is no where near Chicago or Springfield).  Here in southern Illinois (Carbondale, Marion area to be exact) there is a wrestling promotion called All American Pro Wrestling.  AAPW has been around more than 5 years now.  On September 3, AAPW made its television debut on WSIL TV (which I also happen to work for as a news anchor).  I am a color commentator for AAPW, a position that I love and enjoy doing very much.  It's only once a month, I wish it could be more. 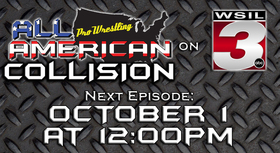 Anyway, our show Collision airs every other Saturday at noon.  The coverage area includes southern Illinois, southeast Missouri, western Kentucky, and a small part of northwest Tennessee.  The next show airs Saturday, October 1 at noon. Your support is appreciated. 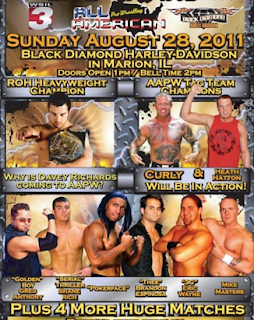 In August, there was some buzz in AAPW, as it was announced the Ring of Honor champion Davey Richards would be making an appearance at a Collision taping.  The plan was for him to work the main event of one of our shows that is set to air in October.  We tape on Sunday afternoons at 2 p.m. at the Black Diamond Harley Davidson warehouse in Marion (here's the taping schedule for the rest of the year)  Our executive producer, Chris Hagstrom, called me around 10:30 that morning saying that Sinclair Broadcasting (which owns ROH) was pulling the plug on his appearance.

This news was disappointing on a number of levels.  My first thought was why in the world would they wait until the day of the show to pull his appearance.  For those who don't know, ROH is launching a new show on Sinclair owned stations around the country.  We offered to do the match as a dark match, with no cameras rolling.  Sinclair still said no. So there was no point in him showing up, and he didn't.

Now there happens to be two Sinclair stations in this market.  And it's recently been announced that the ROH show is airing opposite AAPW Collision on Saturday afternoons on one of the stations.  It's also airing on the sister station on Saturday nights.

I am frustrated by this.  While I have no proof that ROH or Sinclair is doing any of this on purpose it has left a sour taste in my mouth.  Competition is great, but I personally think there's plenty of room in the market for a couple of wrestling shows.  My objection is with all the other time slots available why not pick another?  I know ROH is airing at various times in the afternoon and evening hours around the country.  I have nothing against ROH.  In fact, their social media guy, David Lagana is my favorite podcaster out there.

It just seems like Sinclair is going after the little guy.  And trust me, we are little, but we are mighty and we are strong.  I'm proud to be a part of All American Pro Wrestling.  Watching this show will truly support the local wrestling movement.  Episodes are also available on line by clicking here.

I would encourage you to watch live on WSIL if you live in the area.  If not, please take a look and watch online.  Things are definitely getting interesting with the storylines and the wrestlers give 110% when they're in the ring.  I'm still learning as far as the commentary goes, please give me your feedback.  I've never done play by play for anything before.  I'll admit I'm "greener than goose poop" in those first couple of episodes.  But I really think Chris and I have found a groove in the most recent shows we've taped.  So please, support your indy wrestling whether it's here in SOIL/SEMO/WKY or in your own community. Thanks.
Posted by Kevin Hunsperger at 5:20 PM