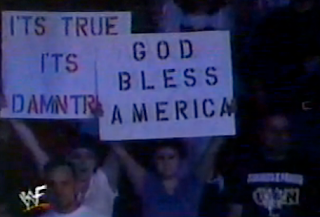 You've have probably already read several posts about September 11, 2001 and it's impact on our country. So thank you for reading another.  Your support is important to us.

For those who don't remember or weren't fans back then, WWE aired a live version of SmackDown! on 9/13/01.  The show was to be taped on the evening of 9/11, but obviously those plans had to be scratched.  The show on the 13th was the largest public assembly after the attacks. 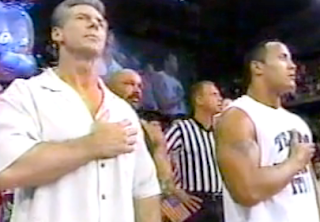 A cynic might think it was Vince McMahon's attempt to cash in on a national tragedy.  I see it differently though.  Vince has always been a "the-show-must-go-on" kind of businessman.  He's also a proud American.  Based on the interviews in the Lagana podcast, one of the being Paul Heyman (who is no fan of McMahon's), Vince wanted to show the world that America is resilient.  He gave his wrestlers and staff the option to not be on the show without any repercussions.  I find it incredibly brave of all the WWE employees to do the show.  As well as the men and women who worked at the arena in Houston, and of course all the fans who were brave enough to enter.  They were all literally sitting targets.

Two days after the attacks we didn't know if there was more to come.  Then filling a building with more than 12,000 people instantly put a bull's eye on the building.  Luckily nothing happened and the show went off without a hitch.

Personally, I'm glad the WWE went ahead and did a show.  It was a welcomed break from all the non stop news coverage that had consumed me for more than 48 hours.  I couldn't stop watching the network news reports, or the local stories about the people in my own community (West Lafayette, Indiana at the time) who had been impacted.

Ten years later, watching Lilian Garcia sing the National Anthem still gives me chills.  The looks on the faces of the wrestlers and fans was so somber.  They were grieving just like the rest of us, but they were doing it in the public's eye and having to perform on top of that.  Jim Ross and Heyman did a great job on the commentary.  Paul talks about how he just hung onto JR and got through the show.  He had lost several friends in the attacks, as many of the other guys and gals in the company had.

In the post 9/11 world, the WWE has flirted with some controversial storylines.  Most notably, Muhammad Hassan, a character who was from the Middle East and bitter about the way Americans were treating his people after the attacks.  Fun fact: Hussein, who was played by Mark Copani is actually an Italian-American.  But his gimmick created lots of controversy and he was eventually released from the company.  It's unfortunate, as I felt like he was a good worker and hoped to see him climb the ladder of success in the WWE.  He definitely had a lot of potential.

What are your memories of 9/11?  Do you think WWE should have done a show so soon after the tragedy?  Share your thoughts here or on Facebook or Twitter.