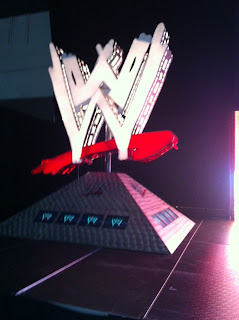 By Chad Smart
I touched on this a few weeks ago when an employee of WWE took TV Week to task for printing a headline about Drew Carey going into a wrestling hall of fame. The employee claimed WWE wasn’t a wrestling company, but rather a global entertainment company.  Today WWE issued a press release pushing this mindset a little further. Part of the press release reads as follows.
STAMFORD, Conn.--(BUSINESS WIRE)--To better reflect the company's global entertainment offerings, World Wrestling Entertainment, Inc. (NYSE: WWE) announced today a new business model for future growth, including formally rebranding itself, WWE.
"The new business model of the company better reflects what WWE is all about, being a global entertainment company"
Two key components to WWE's brand expansion will be the active pursuit to acquire entertainment content companies and the outsourcing of WWE's core competencies – television and film production, live event production and licensing. As part of the new business model, the company will also focus on the development of new television products including scripted, non-scripted and animated programs, as well as the launch of a new WWE network in the next 12-18 months. The first new program of the brand expansion is Tough Enough®, WWE's non-scripted program that debuted on the USA Network on Monday.
"The new business model of the company better reflects what WWE is all about, being a global entertainment company," stated Vince McMahon, Chairman and CEO, WWE. "We will always be loyal to our core business that made WWE a globally known entity, however, the future of WWE will be the addition of new entertainment content opportunities beyond the ring."
This new rebranding initiative will be highlighted through a national consumer and business-to-business advertising campaign entitled "Bigger. Badder. Better.™" The campaign kicked off at WrestleMania® XXVII on Sunday and will be featured on cable TV, print and online.
While I can understand Vince McMahon’s decision to branch out and create other forms of entertainment, I wonder if it’s a smart move. Not to rain on Vince’s parade but his track record for non-wrestling ventures isn’t exactly worth bragging about. The WBF failed to take off back in the early 90s. The XFL was a disappointment rating wise during its only season. Though, I will contend it was more due to NBC scheduling games in primetime then the actual quality of the games. Had the games been played in the afternoon timeslot like other sports, the XFL may have had a chance at more than one season.  WWE films has been around for about five years now and has yet to have even one modest successful film. Over the last six months movies released under the WWE Films banner have been reduced to a one-weekend release on about six screens simply to get Wal-Mart to stock them in stores.
When it comes to television production you can’t really criticize WWE. They do live television as well as anyone and better than any other wrestling promotion. They’ll the king of the hill and more than likely the only way they’ll secede that position is if they take themselves off the hill. And that’s where my main concern with them wanting to expand beyond wrestling lies.
Vince McMahon can say they will always be loyal to their core business, but if you look at the last few years of WWE programming you’ll see the company has failed to build many new stars. And most of the stars they started to build had their legs cut out from under them before they could become Superstars.
Even current WWE Champ, The Miz often gets overlooked in the WWE Universe.  He just headlined Wrestlemania but was an afterthought in the match. Sitting in the stands at Wrestlemania, I was surrounded by constant “Let’s go Cena,” “Cena sucks” chants. Not once was there any type of Miz chant. I’m not saying WWE should have another Steve Austin, The Rock or Hulk Hogan on their roster by now. Those guys are once in a decade type personalities. But when in the last 10 years they have only groomed one or two guys to be featured players maybe WWE needs to focus more on improving their one successful company instead of branching out into other forms of entertainment.
How many other major companies are successful outside of their initial claims to fame? Does Microsoft or Apple do anything outside of computers or computer related products? Does Toyota or Ford have any businesses other than automobiles? Is McDonald’s operating anything other than fast food restaurants? In my opinion this is another example to the theory Vince McMahon is either embarrassed to be in the wrestling business or has such an inflated ego that instead of being happy with the global domination he’s created, he needs to prove he can do more.
It’ll be interesting to see where this global entertainment business plan goes in the next couple of years. I’m just hoping Vince and company don’t take their eyes off what put them on the map and sacrifice the golden goose because of greed.
Posted by Kevin Hunsperger at 1:59 PM