Saving My Clever Wordplay for the Lockdown Reaction Blog 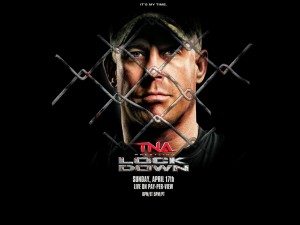 I haven’t seen that much of Impact over the past month. My social life has been booked pretty solid on Thursday’s, and the shows have been leading up to Lockdown, which is one of my least favorite shows of the year. Therefore I haven’t felt a real desire to watch Impact lately.
With that said, I tried to watch last night’s Impact.
That’s right, I tried. I think I got a little over an hour into the show and then Hulk Hogan and Eric Bischoff made their third or fourth appearance on the show and I had seen enough. There’s no reason for them to be on the show that often. No one on the roster is getting over when the focus is put on two guys who don’t, and shouldn’t ever actually wrestle for TNA.  My other main complaint with the show is there were too many backstage segments that felt forced. While I may not agree with the current wrestling show philosophy of spending more time talking backstage, I can appreciate it when done competently. Bad, stilted dialogue in front of a mystery camera just scream FAKE to me.
Moving on from Impact, let’s take a look at this Sunday’s Lockdown pay per view line up.
Ink Inc. vs. British Invasion vs. Orlando Jordan/Eric Young vs. Scott Steiner/Crimson:  4-Way tag team match, in a cage. This is going to be a long show. From what little pieces of Impact I’ve caught over the past few weeks it seems Steiner/Crimson spend more time hitting the rides at Universal Studios than actually wrestling. Ink Inc. have had their day in the sun as credible tag team contenders and are now teasing a break up. Orlando and Eric are the comedy fodder while British Invasion just got back together. All that leads me to believe the British Invasion will pick up the victory.
X-Division X-scape match: Jeremy Buck vs. Max Buck vs. Robbie E. vs. Chris Sabin vs. Brian Kendrick vs. Suicide vs. Jay Lethal vs. Amazing Red: Just typing out this preview is going to drive me to drinking. A TNA trademark, the multi-person cluster match. Good to see someone remembered Jay Lethal was still under contract. Remember when he beat Ric Flair and people thought it was the start of pushing Lethal up the card? Neither does Vince Russo or Dixie Carter or Eric Bischoff or Hulk Hogan. Flip a coin to pick a winner. I’m going with Suicide for no better reason than I like waffles.
Pope Dinero vs. Samoa Joe: Remember when Samoa Joe came into TNA and was unstoppable for a year? Remember when Pope Dinero entered TNA and the crowd wanted him to be a main eventer?  Well stop remembering that and accept both guys are below Matt Hardy in the pecking order now. Match will end in a way where there’s no winner and this feud, which ran out of steam two months ago, will continue because TNA has no idea what to do with either guy.
Hernandez vs. Matt Morgan: Let’s try this feud again with the roles reversed. Guessing Hernandez wins to make Mexican American, or whatever his group is called, look dominating until they get put up against a more popular faction.
TNA Knockouts  Title vs. Hair, Madison Rayne vs. Mickie James I’m surprised TNA hasn’t put the Knockout title on before now. Don’t see Mickie trying to promote her music career ala Sinead O’Connor so expect a new Knockout Champion to be crowned.
Best of 3 Falls, Kurt Angle vs. Jeff Jarrett; Each fall has a different stipulation for winning. Where’s the stipulation for the fans to not have to endure real life situations turned into wrestling angles? Kurt Angle wins and picks up another DUI after realizing he’s in Cincinnati and deciding to pretend he’s a member of the Cincinnati Bengals.
Lethal Lockdown, Immortal vs. Fortune: Ric Flair is listed as being in the match. Ric Flair+TNA+Cage Match=Flair’s starting the match a blonde and ending as a ginger. Good storytelling would say Fortune wins. Vince Russo booking says Daniels turns on Fortune and helps Immortal wins. Stupidity trumps common sense. Immortal picks up the victory.
TNA Title Match, Sting vs. Mr. Anderson vs. Rob Van Dam (or Rob Dam Van): I want this feud to end. I want Anderson and RVD to go away. I want TNA to put the title on someone fresh. In the swerve of the night Jeff Hardy enters the match and regains the TNA title. Or we get another swervey swerve and Sting joins Immortal.
I think TNA refers to this as the most brutal PPV of the year. (maybe they don’t, and I’m making it up. But I seem to have heard that recently.) I’m guessing their phrasing has a different meaning to them than it does to me. I think this is going to be a brutal PPV, but for all the wrong reasons. We’ll find out Sunday night.
Follow @my123cents on Twitter. Watch Kevin’s videos on the my123cents YouTube channel and Like my123cents on Facebook. We crave attention.
Posted by Kevin Hunsperger at 4:35 PM