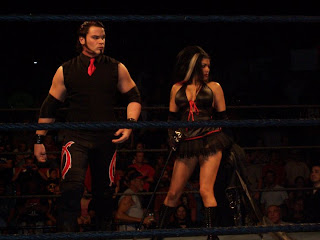 Some would argue that gimmicks are what makes the world go 'round in wrestling.  Some are good, but most flop miserably and we see guys reinventing themselves in an effort to get over with the fans.

Back in the 80's and 90's gimmicks were used more often than they are today.  Today's wrestler (or Superstar) is just a more amped of version of their own personality.  At least that's what I've concluded from my own research.

Today I'm going to look at a few gimmicks that got squashed too soon.  Something that was trying to get over with the fans a few years ago that might be more popular now.

First up, Kevin Thorn and Ariel with their vampire gimmick.  Their time in WWE was brief, but I wonder if it could have lasted longer had the popular Twilight series of movies had already been out.  There's also the vampire drama True Blood which premiered on HBO about a year after Thorn and Ariel were released by WWE.  I didn't mind this gimmick at all.  Thorn was around at time when the big guys were still getting the pushes.  Triple H, Kurt Angle, Batista, John Cena, and the Undertaker were all at the top of the pack.  Thorn and Ariel were a part of ECW, which we all remember it being the red headed step child of the WWE back in 2007.  No offense to red headed step children reading this.

I just wonder now, if the gimmick were still around in light of the Team Jacob and Team Edward wars, could the WWE have come up with something similar in an attempt to cash in on the vampire craze?  I would like to think they could have done something.  As I write this, the Brood comes to mind too.  They could have brought back Gangrel to lead a vampire faction against Thorn and Ariel and another couple of vampires.  Could have been interesting.  I've never read the Twilight books or seen the movies, and I've never watched True Blood, but both seem to get a lot of buzz these days.

Jillian Hall was the WWE's residential awful singer.  I believe it was supposed to be a spoof of Brooke Hogan when she was attempting to make a go as a musical performer.  Is she still trying that?  I haven't heard...

Anyway, right now there's a ton of talk about Rebecca Black and that wonderful tune Friday.  Personally, I like the song and think the girl gets too much flack for it.  Heck, they even spoofed it at Wrestlemania 27 this year with Zack Ryder giving his rendition of this awesomely bad ode to the start of the weekend.

I can only imagine Jillian coming out on SmackDown! and belting out Friday each week. It could have almost become a regular segment.  I don't know how long the fans would have stood for something like that.  I also don't necessarily think it's a good idea to base an entire gimmick off one silly song, but I think they could have used it to help get Jillian over as a heel character.

At the end of the day though it's supposed to be about the abilities INSIDE the ring and not what you're wearing or saying.  But in the world of entertainment (I'm purposely leaving off sports) it's a whole new ballgame.  Only time will tell if the WWE tries to cash in again on pop culture things like vampires or crappy teenage singers.  At least they don't have Cookie or Rob E.  They had the real deal in Snooki (which I'm not sure if that's any better) and the ultimate broski, Zack Ryder.

Thanks for reading, and be sure to check out My 1-2-3 Cents on YouTube and Facebook.
Posted by Kevin Hunsperger at 12:56 PM