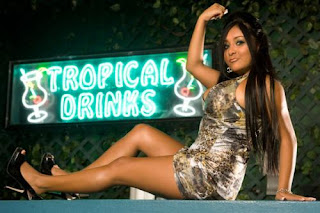 Looky, looky here comes Snooki.  Okay, I picked on TNA when they signed Angelina (of Jersey Shore fame) to a contract recently.  I also picked at them when they had JWOW as a part of their show.

So not to be a hypocrite, I'm going to poke a little fun at the WWE.  They broke the news today that Snooki will guest host next week's episode of Raw.  To this news, I say ugh.

I'm a fan of the Jersey Shore.  But I believe Snooki is probably the most annoying "character" in the history of reality television.  I wonder if this is the WWE's way of taking a shot at TNA and their Jersey Shore gimmicks?  Or are they copying TNA?  At least Snooki is just a one time guest host deal.

I think Chad summed it up best, "If you're going to bring in annoying orange people, it should be Hogan." Very true.  Chad and I are both hoping that this will finally give Zack Ryder some face time on Raw.  This stuff writes itself.  Raw is in my hometown of St. Louis next week, I wish now I was going.  I do have a friend who will be there, so I'm hoping to get details from him.