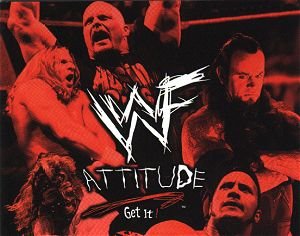 Tonight on Raw they’re advertising The Rock being there live, Undertaker and Triple H having a face to face and I wouldn’t be surprised to see either Trish Stratus or Steve Austin make an appearance to hype their involvement at Wrestlemania 27. Did I find a used DeLorean and travel back to the week before Wrestlemania 17?

While I am in the minority of not being ecstatic about all the Attitude Era wrestlers being involved in Wrestlemania this year, I understand this is the last stop on the road to Wrestlemania and WWE needs to throw out all the big names in a last ditch attempt to convince fans to buy the pay per view. How they’re used on Raw will be the true test.

It seems Triple H and Undertaker have only come up with one promo to base their match around.
I’m going to end your streak!
No you’re not.
Your streak ends in Atlanta.
Rest in peace.

While they had a good match at Wrestlemania 17, that was one hip, one quad, a couple biceps and a rotator cuff ago. Will they use the No Holds Barred stipulation to have a large brawl to cover up the shortcomings of being able to not chain wrestle?

Trish Stratus is teaming with Snooki at Mania. I,… lets move on.

The big anticipation is what’s going to happen when we finally see The Rock, John Cena and The Miz together for the first time. As an armchair booker I think they shouldn’t have done the Cena "live via satellite" bit last week and saved it for The Rock this week. The roof will be blown off when Rock comes out, but how much higher would it be blown if the Rock was on the Titantron in front of his belt rack at home and all a sudden the background disappears revealing a green screen behind him. Then his music hits and he comes out to the ring to confront Cena. I’m guessing at least one fan’s head would explode like in Scanners.

My big concern is what is planned for Rock at Mania. What exactly will he do as host? Is having him on Raw going to take away some of the excitement of seeing him at Wrestlemania for some of the fans. I think WWE should have kept him off Raw and told fans; "Hey you want to see Rock and Cena stand nose to nose? Order the pay per view." Guess we’ll just have to wait and see what happens.

Given the lack of wrestling the past couple of weeks, I won’t expect any 10-minute technical masterpieces tonight. There will be a lot of talking and Michael Cole will be annoying. CM Punk will do something dastardly to Randy Orton. Alberto Del Rio will not have listened to Rebecca Black and once again confuse Monday for Friday and show up on a show he’s not on the roster for and no one will stop him. Zack Ryder will continue to walk around backstage aimlessly because apparently the creative department can come up with and idea for orange goblin from the Jersey Shore but not for a broski who actually has talent.

What are your thoughts? Do you think Raw will entice you to order Wrestlemania?
Posted by Kevin Hunsperger at 4:08 AM