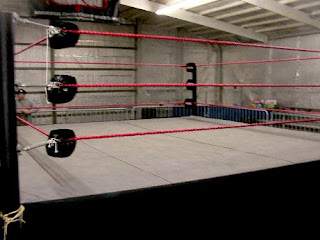 Living in Los Angeles and working in the television industry, I get to see stuff most people don’t. I see episodes of shows weeks or months before they air. I can get scripts of movies that just got sold. I can use connections to get into Comic-Con for free. But tonight, I stumbled upon something that bests any other perk or experience I’ve experienced in my career. As I was walking out of the building at the end of the workday, some papers fell out of the backpack of the guy in front of me. He didn’t notice the papers so I went to pick them up and return them. When I picked them up I noticed the relatively non-descript cover page. It was a standard white piece of paper with a title typed in Helvetica in the center of the page.


Rules for Writing a Wrestling Program (version 3. Copyright 1997)
By
S. Mark Carter
Instead of returning the papers to the unknown guy who dropped them, I started scanning all the words like Jim Carrey in the Number 23. It was like someone had handed me the solution to the mystery of life. Finally I could understand all the nuances of the wrestling programs I’d been watching for the past 15 years. While I thought about keeping this powerful knowledge to myself, I realized it would be wrong to do so. I must share what I read with the general public. So read on and I hope you feel the same sense of wonderment as I felt when my brain first processed these magical grouping of words.


Every show must start with a 15-minute promo: This is an important component to crafting an engaging program. Unlike other live sporting events, wrestling doesn’t get the benefit of a 30 or 60 minute pre-show to hype the competitors, therefore before there can be any in-ring action, the audience has to be brought up to speed on what they’ll be seeing over the course of the show. While the ringside announcers can inform the viewers at home what is going to happen or why guys are in the ring with each other, the live audience isn’t privy to this information. Since they will be the one leading the cheering which tells the home viewer if the current action is good or bad, it is important the live audience knows what to expect so they can prepare themselves to be excited or plan a bathroom break.

Wrestling only happens on Mondays. There are no other days in the week: Since a live wrestling show only takes place once a week all other days of the week must be ignored. This is done as a measure to make sure the audience doesn’t miss any important events in a story. If Wrestler A attacks Wrestler B for no apparent reason on the show, Wrestler B must wait until the following Monday to seek revenge. Even if both wrestlers are on a house show over the weekend, B will not do anything to prevent A from making it to the Monday show. When the Monday show comes around, B can start the show off as part of the opening promo to remind the audience he was attacked and issue a challenge to A.

This also applies to any miscommunication between wrestlers. For example, if in a tag team match one member of the team accidently hits the other member, they will not discuss the matter until the following week when they’re in front of the camera.

Fans only care about main event wrestlers: The audience isn’t tuning in to see guys that have no chance of winning the World Title. In most cases, the main event talents don’t arrive to the building until halfway through the show so something has to be done to entice viewers to keep watching until the main event guys show up. It’s the job of the announcers to mention the main event guys at least once every 15 seconds. The repetition of hearing the main event wrestler’s name will remind the viewer something better is coming up. Also it’s been scientifically proven if a name is said enough, the person listening will sub-consciously believe they’ve seen the person being mentioned. Therefore the more times the announcers can mention someone higher up on the card not involved with the match currently taking place the viewer will think the match is more important than it really is because of science.

Shows need cliffhangers: The goal of a show is to get the audience to come back the following week. The best way to accomplish this to make sure the ending of the show leaves the audience questioning what just happened. No matter who is wrestling, if they’re feuding or if the match is simply a meaningless match between two guys, the show should never end with a clean decision. If there is a clear winner then something needs to happen after the match to put an aura of confusion in the air.

That’s all I can share for now. There’s still a lot in the pages I have. I think it’s an interesting look into the producing of a wrestling show. I know I learned a thing or two. What do you think? Would you like me to share more?
Posted by Kevin Hunsperger at 5:19 AM