The Shield vs. Stride Pro Wrestling 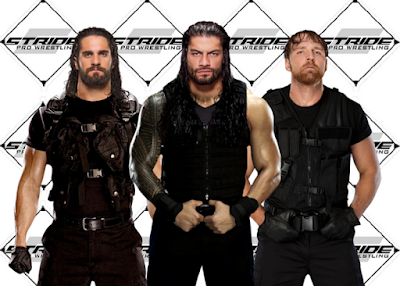 Please note: The Shield is NOT appearing at any Stride Pro Wrestling event. This is merely a FANTASY BOOKING BLOG. Thanks.

The most recent reunion occurred this past Monday, a day after Reigns regained the Universal Championship, Rollins recaptured the Intercontential Championship and a week after Ambrose returned from an extended injury.

Heath Hatton, Ax Allwardt and Daniel Eads. Hatton and Allwardt are two-time tag team champions. Eads has impressed me since meeting him a few years ago. Together these three could pose a huge threat to the Shield.

Tony Flood, Chris Hargas and Roger Matheus. These three have had their differences with each other in the past. However, I think in a crisis situation they could put those differences aside and work together. Flood, of course, is the current heavyweight champion in Stride.

The Midwest Monster and Wraith: Bo Sawyer and Jason Tiller are the tag team champions and Wraith holds the Legacy Title. Not sure how Monster Hunters and a ghost would coexist, but you never know.

Again these are just a few teams. I'll have the King of Trios blog up next week. Who would you put in the ring against the Shield?

Posted by Kevin Hunsperger at 5:45 AM