This underdog has bite

Jay Spade has gone from an underdog to one of Stride Pro Wrestling's biggest names. He held the tag team title with Joey O'Riley before going solo and capturing the heavyweight championship not once but twice. He's the first man on the Stride roster to do so. 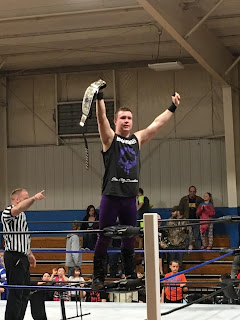 Factor in that he beat Roger Matheus for the belt, a man who is almost twice Spade's size. Spade has quieted all the doubters. Last week, Spade was on the losing end in a rematch against Tony Flood for the championship. That leaves his evening open for this weekend's Wrestling for Sarah fundraiser in Eldorado. 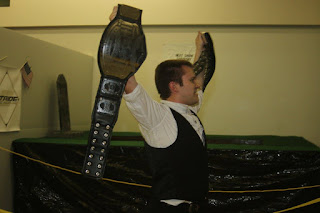 One man has stepped up to that challenge. He's the resident loudmouth of Stride, Dexter Roswell. He is still on a mission to make Stride great again. Personally, I never thought Stride stopped being great, but I appreciate Roswell's ambition. Like Spade, Dexter has come a long way since making his debut nearly two years ago.

Roswell is one of the first graduates of the Stride Pro Wrestling training school. Spade was one of the instructors in the ring as Roswell was coming up. The DR Party leader has shown heart and determination in the ring. But it's often overshadowed by his underhanded tactics like choking opponents with his tie or members of his DR Party, including manager J. Wellington Beauregard interfering. However, Roswell had a run as a co-holder of the tag team titles in a 'Freebird Rules' type scenario with Brian Richards, Scott Phoenix and Aaron Edwards.

Regardless of what you think about the state of Stride Pro Wrestling right now (again, I think it's great) both Spade and Roswell will bring 110 percent to this match. Truth be told though, they already do that. I'm looking forward to this as Spade gets in there with younger talent and refocuses after a brilliant series of matches against Flood. Roswell gets the benefit of showing what he can do on his own in the ring and a chance to work with one of the best teachers out there. 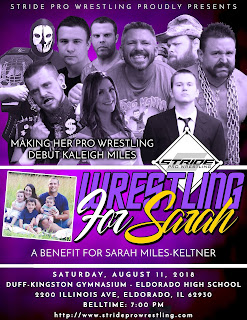 Again, bell time is 7 p.m. at Eldorado High School. Tickets are $10 for adults and $5 for kids. We look forward to raising lots of money for Sarah Miles-Keltner and her family.

Posted by Kevin Hunsperger at 1:30 PM