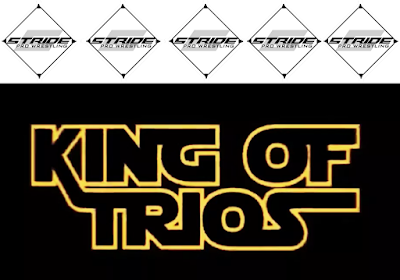 Disclaimer: No one from Stride Pro Wrestling is competing in the upcoming King of Trios tournament, nor is anyone from Chikara coming to Stride. This is another fantasy booking blog. Thanks.

This weekend marks Chikara's annual King of Trios tournament. I love the concept because it pairs up wrestlers from not just the company but around the world. One year Demolition teamed up with the One Man Gang. This year, Molly Holly is on a team called Sisters of the Mighty. Even former Nexus members Darren Young, Michael Tarver and Justin Gabriel are competing.

Teams usually have some kind of common bond and a creative name as well. So I decided to have some fun with members of the Stride Pro Wrestling roster (past and present) and come up with a few teams.

Beyond the Graveyard: Wraith, Ryzer & the Disciple

I think I covered everyone who is a regular on the Stride roster and just about anyone who has wrestled for us. Granted, there are likely a few names missing but the list is mostly complete.

Posted by Kevin Hunsperger at 4:40 AM