Who treats an injured ghost?

I must admit since Wraith made his Stride Pro Wrestling debut in January, I've wanted to learn as much about him as I can. This ghost has not only taken fans by surprise but also the talent on the Stride roster. It took two men (Jerry Travelstead and El Magnifico) to pin him at Stride Goes Steel in May. Wraith is the Legacy Champion and the first winner of the Stride Cup. His record speaks for itself and surrounding himself with various disciples has done him well, with Ryzer being the most loyal of the pack.

Uncovering Wraith's birth certificate a few months ago lead to more questions than answers. But recent developments have provided more clues as I attempt to apply logic in an illogical situation. You see, inside that cage, Wraith twisted his ankle. It's the first time we've seen ghoulish figure show any sign of vulnerability.

At the June 2 show in Christopher, Wraith dominated newcomer CJ Jordan but was clearly not 100 percent in the battle. Naturally, my inquisitive mind led me to find out who Wraith is seeing for treatment for his injury. Wraith doesn't talk and when I asked Ryzer what was up, he yelled so loud at me my ears are still ringing.

However, I have friends in the pro wrestling business around the country and one of them tipped me off that Wraith and Ryzer were recently spotted in Parts Unknown. That is the hometown of countless pro wrestlers but along with the location, a photo was sent. Wraith was with former WWE Superstar Papa Shango. 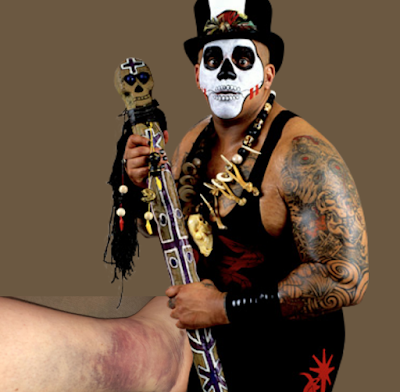 We all know the big man was a voodoo practitioner, typically casting spells that caused pain and/or harm to his opponents. Who can forget the Ultimate Warrior's ooze and subsequent projectile vomiting? I doubt Shango would do anything to hurt Wraith as the two seem to be alike in their desire to destroy those who get in their way. 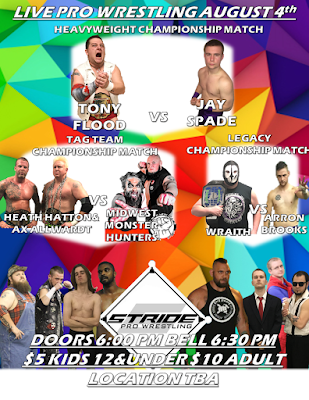 Time will tell if Papa Shango smoking skulls and voodoo potions had an impact on Wraith's injured ankle. As it stands, he's set to defend the Legacy Title against Arron Brooks on Saturday, August 4. We'll see you soon.

Posted by Kevin Hunsperger at 1:06 PM