IF the rules got extreme in Stride Pro Wrestling 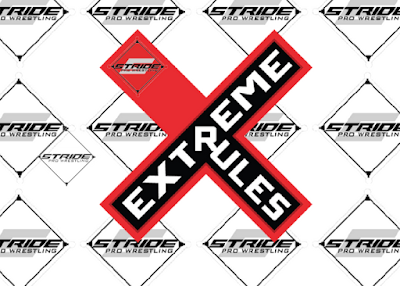 Lead Pipe on a Pole Match
Tony Flood defends against Jay Spade. Flood has used the lead pipe a lot in recent matches with Spade. This time Spade gets an equal opportunity. Whoever reaches the pipe on the poll gets to use it on his opponent. Of course, the pipe can be wrestled away and anything goes.

Casket Match
Wraith has risen from the grave and tries to send Brookspool to his demise in this match. The winner is the Stride Pro Wrestling Legacy Champion.

First Blood Match
I'm not a big fan of blood and gore in pro wrestling, however, the rivalry that has developed between Cash Borden and Roger Matheus it only seems fitting for some violence to be a big part of the contest. This match also has sees the fans bringing weapons for each man to use.

Ladder Royal Match
I have no idea if this kind of match has happened or if it could even be pulled off. But it starts off as a battle royal. The last two men standing immediately start a ladder match with a contract hanging above the ring. Inside is a chance for ANY championship on the Stride Pro Wrestling roster.

Posted by Kevin Hunsperger at 2:28 PM