When I think of Nikolai Volkoff the first thing I think of is his singing of the Soviet National Anthem. As a bad guy in the 1980s, there was no better way to get that heel heat than side with Russia or Iran. Volkoff and Iron Sheik did this perfectly along with their manager "Classy" Freddie Blassie and later Slick.

I remember the first time I saw Volkoff was really before I was a wrestling fan. He was on TV and Andre the Giant was brawling with him. I have no idea what company this was because as I mentioned, I hadn't really started watching yet. Andre assaulted Volkoff, even hitting him with a chair. In my young, fearful mind I was concerned these actions would lead to the United States into World War III with Russia.

Once I started watching wrestling, Volkoff's size and power quickly made him a top contender to Hulk Hogan's championship. I recall the Saturday Night's Main Event where Hogan successfully defended against Volkoff.

The big Russian's only championship win came at WrestleMania when he and Sheik beat Mike Rotundo and Barry Windham for the tag team titles. They didn't hold the belts long but their reign helped add some spice to the Rock 'n Wrestling era of pro wrestling. 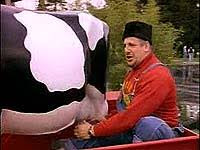 Speaking of that time, I loved that so many Superstars were used in Cyndi Lauper's 'Goonies Are Good Enough' video. Volkoff sits proudly milking a cow as Sheik, Blassie and Roddy Piper are creating chaos.

Volkoff's face turn and partnering with one time rival "Hacksaw" Jim Duggan was expected as relations between the U.S. and Russia improved and there weren't many other options for Volkoff. When he returned again in the mid-90s and joined the Million Dollar Corporation as 'down on his luck' Superstar, I fear it was a case of art imitating life.

Rest in Peace, Mr. Volkoff and thanks for the memories.

Posted by Kevin Hunsperger at 3:08 PM