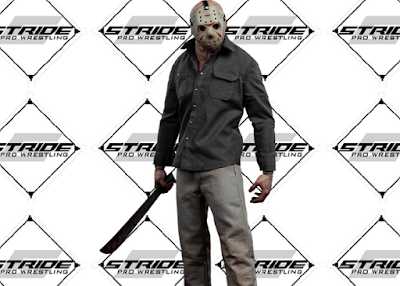 It's Friday the 13th and of course, my first thought goes to the hockey mask wearing, machete wielding, teen killing movie monster Jason Voorhees. I grew up in the 80s and remember all too well going to the video store and renting the various Friday the 13th films. (Fun fact: part 3 is my favorite.)

Jason was a legit badass. But how would this iconic killer fare against the roster of Stride Pro Wrestling? Imagine the guys spending a weekend at Camp Crystal Lake for a benefit wrestling show. Things get out of hand and Jason is looking for blood. These men are who I'd want around me to keep me (and the rest of us alive).

Until recently I never gave much thought to how tough Cash Borden is. I should have known that, but he's brought it more to my attention his battles in a variety of hardcore matches. Cash would be the first in line, armed with a barbed wire baseball bat, his taser tucked away in his back pocket and a cigarette dangling from his mouth. Cash would be fists of fury and would certainly give Jason a run for his money.

Cash's most recent rival in Stride Pro Wrestling, Roger Matheus is another competitor who would give Jason a run for his money. Roger's size and look is the most intimidating of anyone on the roster. Not to beat a dead horse, but I still get goosebumps thinking about the night I wrestled Roger and he made his way to the ring in the dark with the spotlight on him and the live band playing his theme music. It was bold enough to make Jason put down his machete and head for the hills.

The Midwest Monster Hunters make their money ridding the world of things that go bump in the night. It only makes sense that Bo Sawyer and Jason Tiller would step up and take out the killer. The former Stride Pro Wrestling tag team champions would use the numbers game to their advantage as well as their size and strength. Jason wouldn't stand a chance.

Finally, Chris Slammer. He's not on the Stride Pro Wrestling roster, but he is training to be a wrestler. I have never met Chris in person, but we talk online a lot. This pic he posted today reminded me to include him in this post. Not only does he have a machete to take on Jason but a couple of guns also.
Who would you pit against Jason Voorhees? Post here and don't forget to keep up with Stride Pro Wrestling here.
Posted by Kevin Hunsperger at 12:48 PM