Stories from the front row

I should begin by saying I debuted my new Shinesty suit. It's a custom-made My 1-2-3 Cents that I purchased for the sole purpose of getting the My 1-2-3 Cents brand out there. I also created a Snapchat filter for the evening. The stats aren't in on how many people used it, but I feel like both things got some attention for the brand which was the whole point. I ran into several great fans at the SIU Arena that night.

That being said, when ring announcer Greg Hamilton made his way to his seat (which was right in front of us) he commented, "I almost wore that same suit." A little later my night was made by the Miz. After he made his way to the ring apron, he glanced down at me and mouthed "What the hell are you wearing?" I know he had no idea, but I actually met and interviewed the Miz back in 2010 before a house show in Cape Girardeau, Missouri. I really hoped he would have come back down and taken a selfie with me. Instead though, when Daniel Bryan punched him at one point he spat and the front row got sprayed. I'm thankful my Shinesty suit is machine washable. 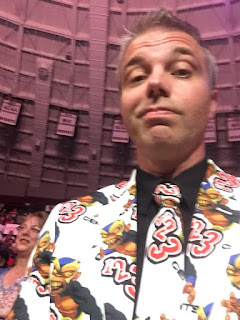 Remember, the name is My 1-2-3 Cents and if you're reading this for the first time, it comes from the expression, "that's my 2 cents." Because a referee counts to three, I added the three count to it to make it give it some wrestling flavor. And since I knew I'd never run a news site and mostly opinion based it seemed like the right call nearly eight years ago.

So I'm in my suit and someone working security actually asked me, "Did you used to be the 1-2-3 Kid?" I chuckled to myself because what a compliment that someone would see me and think that I was a one time WWE Superstar. I told him no and explained the suit was all part of my brand and the name of the podcast and blog.

Other things I noticed from the front row, I don't know why, but I always thought there would be something more elaborate than a wrench used to ring the bell. I also didn't realize the ring announcer was tasked with that at house shows. I figured WWE would have created some sort of cool device for the timekeeper, but hey the wrench does an incredible job of making sure fans hear that bell.

WWE does a great job making sure the crowd has fun. The New Day tossed pancakes into the crowd. One of the Usos threw his hat to fans. And several Superstars stopped after their match to sign autographs to the adoring youngsters in the front. Even old timers like me got to slap hands with Daniel Bryan, Kofi Kingston and Big E. All in all, I had an amazing time. I'm grateful for the opportunity and look forward to the next time WWE is in town. Check out more photos on the My 1-2-3 Cents Facebook page. And I invite anyone who attended the Carbondale show to join us for the next Stride Pro Wrestling event on Saturday, Aug. 4. Check the company out here.

Posted by Kevin Hunsperger at 3:25 PM