Earlier in the month, I shared a blog about some of the Stride Pro Wrestling roster's tattoos. It got a great response and so I've decided for the foreseeable future to make it a weekly feature here. There are plenty of wrestlers with ink and this blog will share the pics and the backstory on each design. 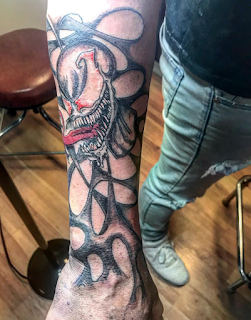 The first installment features Arron Brooks. I wrote more about his tattoos here. But over the weekend, Brooks added more ink to his collection. We've talked on the My 1-2-3 Cents podcast and in previous blogs about Arron's love for comic books. The new tattoo is the Marvel character, Venom.

Brooks' original plan for this tattoo was to get Venom's spider logo on his hand with the black symbiote crawling up the forearm. But when the tattoo artist did his thing, he came up with Venom and the symbiote around the character and trailing down Brooks' forearm to the top of his hand. Brooks is pleased with how this tattoo turned out and has fashioned himself more of a Venom fan over Spiderman.


Stand by though, Brooks has more tattoos planned. He will be getting his favorite comic book character Deadpool next. You may remember seeing Brookspool at the Stride Goes Steel event back in May. The new tattoo will be a half sleeve. We'll update you here. You can also check out Brooks' Facebook page and keep up with him.

Come to see Brooks' new tattoo as he goes face to face with Stride Pro Wrestling Legacy Champion Wraith this Saturday night. The two meet on August 4 at John A. Logan College in Carterville. Bell time is 6:30 p.m.

Posted by Kevin Hunsperger at 5:57 AM