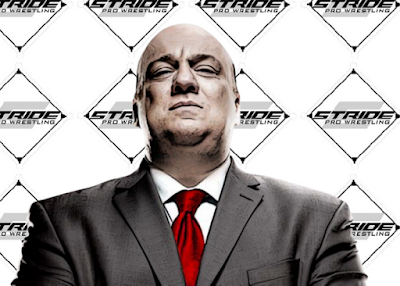 Please note: Paul Heyman is NOT coming to Stride Pro Wrestling. This is a fantasy booking blog post.

Paul Heyman has been a staple in professional wrestling for more than 30 years. He's managed many great wrestlers and even ran his own company for years. Brock Lesnar, CM Punk, "Ravishing" Rick Rude and "Stunning" Steve Austin are just a few 'Paul Heyman guys' out there.

With the buzz being on Lesnar returning to UFC to face Daniel Cormier later this year, I thought Paul Heyman may be looking for a new guy inside the squared circle. So I'm taking this opportunity to offer up someone from the Stride Pro Wrestling roster. Of course, there is plenty of amazing talent here in Stride, but in my 1-2-3 cents, Chris Hargas and Heyman would be the perfect fit.

I've been a fan of Hargas since meeting him in 2016 at a Stride show. He's got about 17 years of in-ring experience and has proven himself against many of the best on the Stride roster and beyond. Hargas is the only man in Stride to cleanly pin Roger Matheus. He's the former Legacy Champion, having only lost it because of an injury and he had to forfeit the title. Hargas is also the man who buried Red Daniels (RIP) alive. It's still one of the most talked about matches in Stride's history.

That's just a sample of Hargas' resume here in Stride. He's also the former SICW Heavyweight Champion. He's been a mainstay there for years and has proven himself time and time again against some of the best in the business, including Heath Hatton.

Clearly, Hargas has the talent. A partnership with Heyman would take him to the next level. Hargas wouldn't have to compromise his principles either, as he's one of the most popular guys on the Stride roster. It's fair to say Heyman and Lesnar right now are more tweeners than anything. Most of the time it depends on who Lesnar is facing that dictates the fan reaction. However, we've seen Hargas has a mean streak when provoked and Heyman would definitely help the former Legacy champ harness that aggression. 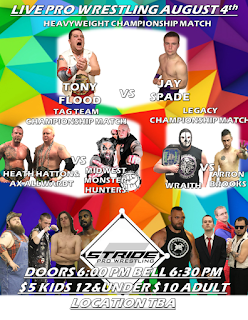 You can catch Hargas and the rest of the talent on Stride Pro Wrestling's roster on Saturday, Aug. 4. The location of the show is still being worked out, but there will be a show that night. Who do you think would be a great 'Heyman guy' on the Stride roster? Weigh in here or on the Stride Facebook page.

Posted by Kevin Hunsperger at 12:37 PM