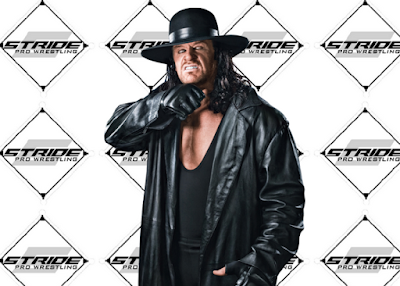 Please note: The Undertaker is NOT coming to Stride Pro Wrestling. This is a fantasy booking blog post.

Saturday night the Undertaker returned to the ring to team with Braun Strowman and Roman Reigns to beat Kevin Owen, Elias and Baron Corbin. Since Undertaker is doing some house shows, I figured why not have Undertaker pay a visit to Stride Pro Wrestling. Here are a few opponents I'd like to see Undertaker work with on the Stride roster.

Wraith seems to make the most sense from a gimmick standpoint. The ghostly figure has been a menacing force in Stride since his debut in January. He's the winner of the first Stride Cup Tournament and the current Legacy Champion. His size, strength and agility would make for a competitive match with Undertaker. Plus with Disciple Ryzer ringside, you never know what might happen.

In what would be billed as a face vs. face encounter, Heath Hatton would give Undertaker one helluva match. He's held every championship in Stride and has proven himself in high-pressure situations. He's grappled with guys bigger than him with success, including Frank Wyatt and the late Red Daniels. Hatton's execution of the flying punch and his spear could pose a huge threat to the veteran Undertaker.

When it comes to brawlers in Stride Pro Wrestling, it's hard to find anyone better than Roger Matheus. I went over his qualities in the Vader vs. Stride Pro Wrestling blog a couple weeks ago. Matheus has trained with the likes of Bobby Lashley and has had an intense match against Abyss in Cape Championship Wrestling. His dominant run as Stride Pro Wrestling Champion punctuates the brutality he'd bring against Undertaker.

Bo Sawyer is a rough and tough member fo the Midwest Monster Hunters. Some consider Undertaker a monster. It would only make sense to see these two big guys mix it up in the ring. But remember, the Monster Hunters don't travel alone so the Undertaker could find himself outnumbered quick.

What other Stride competitors would give Undertaker a good match? I could also see the likes of Chris Hargas, Farmer Billy Hills and Ax Allwardt all providing the Deadman with some stiff competition.

Posted by Kevin Hunsperger at 11:29 AM