I'm old enough to have had the chance to watch Bruiser Brody wrestle. My fandom started in 1983, about five years before Brody's life came to a tragic end. But in those five years, I'm flooded with many great memories of one of the toughest wrestlers to walk the planet.


Most of the work I recall from Brody happened in World Class Championship Wrestling and the AWA. He would come to Texas and team up with the Von Erichs in their battles with Skandor Akbar's Devastation Incorporated. Brody would go toe to toe with beasts like Kamala and eventually Abdullah the Butcher among others. It was funny because he was the bad guy in the AWA under the management of Sheik Adnan-al Kaissie.

A week after attending my first professional wrestling show (WWF in Dec. 1984), we took in our first NWA event. Ric Flair defended the championship against Brody. Until recently I had no idea the match was online. The two battled to a bloody no-contest and Flair walked out with the gold. This was before my appreciation for the "Nature Boy" was found so I was disappointed with the outcome.


Besides Flair, I'd argue Abdullah the Butcher was Brody's biggest rival in the business. The two carved each other up with foreign objects, including the Butcher's famous fork, in promotions around the world. Both of their foreheads looked like road maps after their years against each other in the ring. 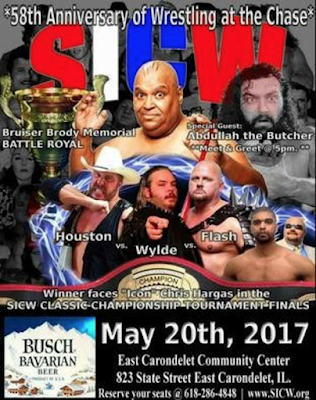 This Saturday night, May 20, SICW celebrates the life of Brody with a memorial battle royal. His widow, Barbara Goodish, will be on hand as well as Abdullah. The event is also the celebration of the 58th anniversary of Wrestling at the Chase, a show that was a staple in our home on Sunday mornings for many years.

Posted by Kevin Hunsperger at 2:22 PM