One of the most sadistic men to step into the squared circle is Abdullah the Butcher. The more than 400-pound Sudanese mad man made a career out of slicing and dicing his opponents. His usual weapon of choice was something we all use every day: a fork. 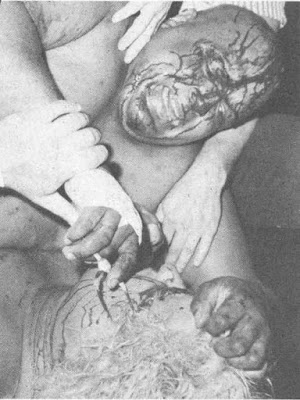 With a name like "the Butcher", you would expect a violent temperant. Abdullah provided that for decades as he carved up the foreheads of opponents like Bruiser Brody, Dusty Rhodes and Carlos Colon. Gallons of blood spilled in countless rings, not just from Butcher's opponents, but from his own head. It always looked so painful and the scars that were left behind remain. Of course, barbed wire, chairs and other weapons played a role in these infamous feuds for the Butcher.


Until I started doing some background searching for this blog, I didn't know Hulk Hogan was also "forked" by Abdullah the Butcher. The two battled it out in Japan in 1982 and as you can see, The Hulkster (before he was the Hulkster) bled like a stuck pig that night. And one of the few men bigger than Abdullah, Andre the Giant also got a taste of the fork as well.

In 2011 I paid homage to Abdullah with my wardrobe choices that night. I secured a fork to my tie for the WWE Hall of Fame Ceremony. Fellow Hall of Famer Terry Funk inducted Abdullah that night and I believe it was the first time I'd heard the Butcher speak at a wrestling related event. He always had such a mystique about him, but he's really a gentle giant, or so it seems.

Abdullah the Butcher will be a guest this weekend at the SICW show in East Carondelet, Illinois. That night features the Bruiser Brody Memorial Battle Royal.


Posted by Kevin Hunsperger at 5:01 AM