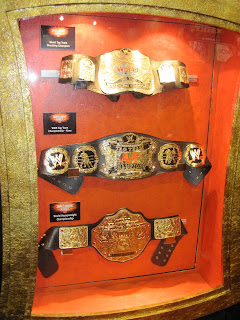 Guest post from Chad.
The 2011 Royal Rumble is a mere 4 days away. On that night, WWE Champion The Miz will defend his title against Randy Orton.  Speculation amongst my friends and other fans online is Randy will walk out of Boston as a 7 time WWE champion.  Why is that? Why is no one (except Miz’s personal propaganda machine Michael Cole) giving the Miz a chance of retaining the title?
Kevin and I discussed it on one of our YouTube conversations but the simplistic breakdown is titles are being put on wrestlers who either aren’t ready for the title or aren’t given the chance to succeed once they have the gold around their waist.
Currently I’d say WWE has five top tier main eventers. John Cena. Randy Orton. Edge (debatable). Triple H (on injured reserve) and The Undertaker (also on the IR). When these five guys are in a match with anyone else the general consensus is they will win the match.  Edge is the most likely guy of the five to end the match with his shoulders on the mat.  John Cena gets attacked by seven guys at once and still ends up standing tall when the bell has rung and the theme music starts playing.  Why should fans care about the opponent when match after match they see the same guys walking out victorious?
On the flip side of the above-mentioned talent there are guys who could be future main event talents but have been hindered by constant bad booking. Here are a few examples.
The Miz: We’ll start with Miz since he was mentioned at the beginning of this piece. The Miz is a multiple time Tag Team Champion, former United States Champion and as stated, current WWE Champion. Even with all those accolades, I’d wager most fans see his current championship reign as temporary, having already exceeded their expectations. A year before winning the WWE Champ, The Miz entered into somewhat of a feud with John Cena. I say somewhat because if memory serves me right the feud was mostly Miz calling Cena out and Cena never bothering to respond. Then when they did finally have a match Cena won in short dominating fashion.
Miz won the WWE title by cashing in his Money In the Bank briefcase and attacking Orton after Orton had just beaten Sheamus in a hard fought match.  Even though all but one MITB winner has won the match in similar fashion, it’s not exactly the best way to establish yourself as a serious contender. Since winning the title, Miz needed help from announcer Michael Cole to beat Cole’s broadcasting partner Jerry “the King” Lawler in a ladder match.  Miz was pinned by “The King” in a tag team match a week later. In a tables match, Miz, with help of Alex Riley, pushed Randy Orton through a table to retain the title. The only match Miz has had where he looked formidable was against former tag team partner John Morrison, who isn’t exactly viewed as a threat to any title.  Looking at how Miz has escaped with the title more times than successfully defended it and it’s easy to see why few people give him a chance at still being champion when Raw goes on the air Monday night.
Jack Swagger: Swagger won the Money in the Bank match at Wrestlemania 26.  Wasting little time, Swagger cashed in the briefcase beating Chris Jericho for the World Title a few days later.  Swagger had a previous run as ECW champion but that belt was often treated as a lesser title than the US or Intercontinental titles with Pay Per View matches being over in less than a minute. I honestly couldn’t remember any matches during Swagger’s title reign.  Looking at Wikipedia it appears he held the title for two months, losing it in a Fatal 4-Way match.  Since dropping the title, he hasn’t really had a real meaningful storyline.  He’s just kind of floundered around the I-C title picture.
Ted Dibiase and Cody Rhodes:  Ted is a third generation superstar while Cody is a second-generation star. These two appeared destined for greatness as soon as they arrived on the scene. They were paired up with Randy Orton, himself a third generation wrestler, and dubbed Legacy.  Legacy imploded at Wrestlemania 26 with a three-way match that Randy easily won to prove his superiority over the other two.  Since that match, Ted reintroduced his father’s Million Dollar Title for a brief run before having it stolen by Goldust, and has been on a losing streak for the past few months.  Cody became “Dashing” Cody Rhodes and gets more airtime giving grooming tips than wrestling.  Even though Ted and Cody were Tag Team Champions, I can’t recall a single big match they won. They faced D-Generation X at SummerSlam 2009. That would have been the opportune time to have them beat an established team and move up the ladder of success. Instead DX won showing the fans Ted and Cody weren’t good enough to hang with the big boys.
Sheamus: Within his first two months of being part of the Raw roster, Sheamus was presented as a dominating force. He would attack ring announcers and delivered such a lethal beat down to Jamie Noble, Noble ended up retiring.

Personally, I didn’t understand why I should fear a guy who’s claim to fame was beating up non-wrestlers and forcing a guy who hadn’t been seen as anything more than a whipping boy in over four years.  Nevertheless, Sheamus soon got a title match against John Cena at the Tables, Ladders and Chairs Pay Per View. Sheamus defeated Cena to win the WWE title when while fighting on the turnbuckles both men slipped and fell.  Sheamus fell to the outside of the ring; Cena fell backwards through a table giving Sheamus the victory.  Not exactly a credible way to win or show domination by the challenger. Sheamus would hold the tile for about two months, losing it in an Elimination Chamber match against five other guys.  He would regain the title at the Fatal 4-Way Pay Per View and have a three-month reign as champ. Since losing the title, Sheamus has mostly feuded with John Morrison and not been near the title hunt.
Those are just a few examples of guys who could be, and probably are, the future of WWE. If you look deeper into their times at champion, more often than not they were set up to fail.  No decisive wins. Short reigns on top. And as soon as they lost the title they fell back down the card instead of getting numerous rematches as Randy Orton, John Cena, Edge and Triple H are most likely to do.
Another difference between the top tier and the next levels is everyone on the top tier has reached a point where wins and losses don’t matter in the eyes of fans. John Cena and Triple H could lose every match from now until SummerSlam and the fans will still cheer for them like they do now.  Part of that might be because even in defeat they find a way to get the last shot in and be standing in the ring as the camera fades to black. On the flipside, they guys moving up the ladder are affected by wins and loses. When The Miz has trouble winning every match he has and is made to look like a punk (not the CM variety) by his opponent (namely Cena or Orton) fans see him as a chump.
Who is at fault here? Is it the wrestlers who can’t convey to the audience an aura of superstardom to justify a lengthy title run? Is it the writers who don’t plan for more than a month at a time? Is it the current wrestling landscape of weekly television and monthly PPVs? Is it fans that have no long-term attention span and want something fresh every month?  Whatever the cause, something needs to be done to make sure the next champions are seen as championship material and not the second coming of David Arquette.
Posted by Kevin Hunsperger at 4:17 PM