Flashback Friday: Raw is War or War is Raw 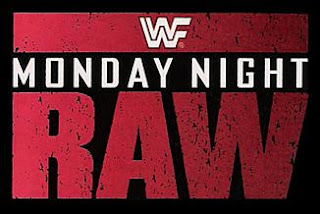 January 11, 1993:  The face of professional wrestling changed once again.   Vince McMahon and his WWF crew came up with something new and different.  Raw was taped to look live, something that hadn't been done before.

I was in college when that first Raw hit the airwaves. It was a big deal.  I had grown up on Super Stars and Prime Time Wrestling and who could forget Tuesday Night Titans.  Raw blew all of that out of the water.  It was glitzy and slick.  There was a lot of pomp and circumstance.  Pyro galore.  Pretty girls caring ring cards in between matches.

In the beginning Raw was an hour show.  Seems unimaginable by today's standards.  They did actually cram quite  a bit of wrestling into those 60 minutes.  That first episode featured four matches, including one with the Undertaker and soon-to-be Hall of Famer Shawn Michaels.  (They did not wrestle each other)  In fact for the most part the matches were all squash matches.  In other words, you knew who was going to win.

That formula seemed to work for a couple of years, until Eric Bischoff and his crew at World Championship Wrestling got into the game.  Then the war started.  Nitro was live each week and on for two hours.  Raw was still just 60 minutes and taped each week.  If you're reading this, you know the history of the Monday Night Wars, so I'm not going to recap all that.  We know who won, how we got there has been documented thousands of times before this post.

In all the years that Raw has been on the air, I've only attended two shows live.  The first was back in 2007.  It was about this time of year too.  This was the buildup to Wrestlemania 23, you remember, when Vince McMahon was "feuding" with Donald Trump.  That was the night we got the "Rosie O'Donnell" vs. "Donald Trump" match.  Yeah, I was there live for that.  As lame as that was, perhaps even lamer is that's about the only thing I remember from that night.

My friends Chad, Randy, and I were dressed as the 3 Faces of Hogan.  I was Hulkamania, Chad was Mr. America, and Randy was "Hollywood" Hogan.  Our costumes even got us a shot in the opening crowd sequence.  I was very pleased with that.

Something else from that night that I remember was Vladmir Koslov coming out during the commercial break or before the show even started.  He talked about loving double-double-E.  He may have beaten Hacksaw Jim Duggan in a match for Heat (if that was still on)  I'm really having  a hard time remembering.

The second Raw I attended was much more memorable.  This was the one after Ric Flair's "retirement" match lose to Shawn Michaels at Wrestlemania 24.  Chad and I had been in the fourth row for that match and when we read the next day that the Horsemen were coming to Raw to send off Flair the right way, we quickly snatched up tickets.

We ended up on the opposite side of the camera and were on several times during the night.  We weren't dressed like fools, so we really didn't stand out.  I remember that night was very special because of all the accolades Flair was receiving.  When the show went off the air, there were more surprises, including the Undertaker coming out and paying homage to "the man."  It was an awesome night and a great way to cap off an exciting weekend.

Raw has definitely stood the test of time.  18 years on the air is an accomplishment if you follow the entertainment industry at all.  Through the years the show has been able to reinvent itself (for the most part) and change with the times.  Unfortunately I think it changes a little too much.  I'd like to have Jim Ross back calling the shots.  I enjoyed him a lot.

Through the years Raw has brought us a lot of entertainment and here's to many years to come.  Happy birthday Raw!
Posted by Kevin Hunsperger at 5:03 AM