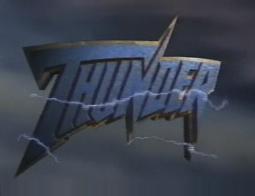 The late 1990's served as a boom for the wrestling business.  In 1995, Eric Bischoff who was leading the charge for WCW started the so called Monday Night Wars when he and others within the Turner company created Monday Nitro to compete with the WWF's Monday Night Raw.

After much success with that formula and a growing talent pool, it was time to expand.  WCW would launch "Thursday Night Thunder" in January 1998.  The first episode aired on January 8th of that year.  It's live format offered fans another two hours of wrestling action each week.

Probably the biggest shocker (no pun intended) from that first episode was "Gentleman" Chris Adams pinning "Macho Man" Randy Savage.  Of course, there was interference from Lex Luger that night, and the decision was eventually reversed.

The show stayed on the air through the Monday Night Wars which also became Thursday Night Wars when WWE added Smackdown! to its schedule.  I think when the E took the upper hand in the war, WCW executives moved Thunder to Wednesday nights.  It stayed on air until WWE bought the company in 2001.

I wasn't a regular Thunder watcher, but I did check out the show.  About 3 weeks into the show, I actually attended a live edition in Hunstville, Alabama.  I was a young reporter at the time working in nearby Florence.  Because of my job, I was able to get a media pass and interview several of the stars of the day.

Buff Bagwell, Goldberg, Ray Traylor, and Bobby "the Brain" Heenan all joined me for a few minutes to talk.  It was a very memorable experience.  You can see the clips on My 1-2-3 Cents on YouTube.

That night was interesting, because when we arrived at the arena in Huntsville we were greeted by the WCW staff.  They were all very nice to us.  Then they brought over our first interview, Goldberg.
The interview wasn't very eventful though.  Goldberg had just started with his winning streak.  This was still about 3 months before he was red hot.

Then there was a lull in the activity.  There were 3 other TV stations there at the time, and the wrestlers were just hitting us one at a time.  So in the downtime, I decided to shoot some video of the ring as the crew was setting it up.  This turned out to be a huge mistake.  Doug Dillinger, who was WCW's security guy (sorry I don't remember his exact title), approached me and asked what I was doing.  I told him getting "b-roll" (video) to go along with the story.  He proceeded to yell at me and tell me I had no right getting shots of the ring.  Keep in mind NO ONE said getting video of the ring was off limits.  Then he demanded my tape.  I assured him that I would not use the material, and I didn't want to give him my tape because my interview with Goldberg was on there.  He insisted and took the tape and said they'd erase only the footage of the ring and "try" to save the interview.

Dillinger gave me the tape back a short time later, but the interview with Goldberg was gone.  I was disappointed by that.  The only thing I can think that set him off was the fact that the Giant (aka the Big Show) destroyed the ring that night as the Outsiders stood inside it.  My guess is that the crew was rigging it to make it collapse easier.  I didn't have a problem with being told not to shoot the ring, but the way Dillinger came at me, yelling and embarrassing me in front of everyone else indicated to me that he's a class a douche.

The rest of the night went well.  The interviews were entertaining, especially the Bagwell and Heenan ones.  I was young and nervous and trying not to mark out the whole time.

Those are my memories of Thunder, which entered our world 13 years ago this week.
Posted by Kevin Hunsperger at 6:17 PM