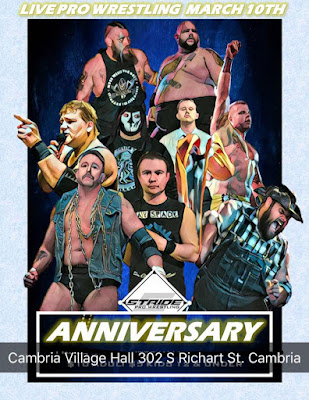 It's hard to believe two years have just passed since the first ever Stride Pro Wrestling show. The company has come a long way in that short amount of time, hosting fundraisers in front of capacity crowds and raising thousands of dollars for worthy causes. The Anniversary Show is happening this Saturday but in a different venue. If you've been following along this year so far, we've been bumped from our location at the Illinois Star Centre Mall in Marion. Long story, but eventually things will work out (we hope).

That being said, Saturday, March 10 Stride hits the road again with a show at the Cambria Village Hall. Where is that you ask? The address is 302 S. Richart St. in Cambria.

There will be lots of action Saturday night, including a tag team title rematch. The new champs, Ax Allwardt and Heath Hatton will defend against the DR Party, Dexter Roswell and Scott Phoenix. Bo Sawyer takes on Joey O'Riley and Bull Bronson will no doubt have words for Roger Matheus. Who's fancy will J. Wellington Beauregard strike? All your other favorites from Stride Pro Wrestling will be on hand and a new face or two as well.