Eight is enough, actually too much 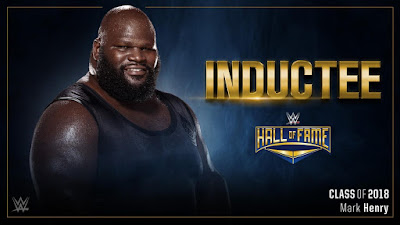 WWE is adding one more name to the 2018 Hall of Fame class. 'The World's Strongest Man' Mark Henry will join seven others already announced for the ceremony on Friday, April 6. I have no opposition to Henry going into the Hall of Fame, but I do believe eight inductees is a bit much. I suspect there will be another Legacy Class announced too.

The point of this post isn't to judge who is going into the Hall of Fame. Each man and woman has the done enough in their respective careers to be inducted. Having attended nine Hall of Fame ceremonies in the past, I know first-hand speeches can be long and the evening gets out of control quick. Ten years ago when Ric Flair went in his speech coupled with the Rock's induction of his father and grandfather extended the evening past midnight. Kane had to cut off Mr. T in New Orleans. I love hearing from some of my favorite Superstars, but there's a point when we have to wrap up things.

My favorite ceremony was in 2013. There was a class of five Superstars and one celebrity at Madison Square Garden. Each one could have been the headliner that year too, with Bruno Sammartino, Bob Backlund, Booker T, Mick Foley and Trish Stratus going in. Vince McMahon inducted Donald Trump that night too.

If I held the keys to the castle I would limit the ceremony to four Superstar inductions, one celebrity (and not each year) and the Warrior Award along with the video package for the Legacy Class. Those four Superstars would include a main eventer, a tag team, a female wrestler, and the last spot would be for an announcer, manager or mid card Superstar. On years of no celebrities, I'd add another midlevel Superstar.

Mark Henry has been involved in pro wrestling for more than 20 years. He's more than worthy, having great runs with the cream of the crop, including his 2011 World Championship reign. However, I don't recall hearing anything about an official retirement. Personally, I'd rather WWE wait a couple years to induct Superstars after retirement. But I also understand wanting to strike while the iron is hot like they did with Edge, Shawn Michaels and even Flair.

Posted by Kevin Hunsperger at 12:23 PM