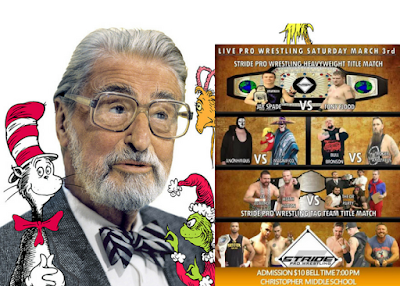 It's 'Dr. Seuss' Day and surely you've heard of classics like The Cat in the Hat, Fox in Socks and Hop on Pop. Today I give you another pro wrestling twist. While this will never hold up to the good doctor's writing, I submit to you Fights in Tights.

Stride Pro Wrestling is soon hitting the road.
The roster is in fundraising mode.
Christopher students will benefit from Saturday's show.
They're going to New York and need to raise dough.
Six matches are scheduled to entertain the crowd.
No doubt all the efforts will make our fans proud.
They grew up together, but now there's bad blood.
Stride Champion Jay Spade will face Tony Flood.
Both have years of experience inside the ring.
But after this match, only one will be king.
No one knows Anonymous under that mask.
Even the GM is too scared to ask.
He battles Magnifico for Legacy gold.
And the Stride Cup or so we've been told.
A Legacy contender will be put in place.
Either a mystery man, T-Dog, JD and Ace.
Hatton and Ax put their differences aside.
They want to be the best tag team in Stride.
Dexter and Phoenix will fight very hard.
And will have backup thanks to Beauregard.
Bronson and Matheus are the biggest of all.
Picking a winner is too tough to call.
Bo Sawyer the newcomer has really mean looks.
He's destroyed O'Riley and now targets Brooks.
Those are the matches, none are too strange.
But remember as always, card subject to change.

Posted by Kevin Hunsperger at 4:59 AM